watch 02:03
Wiki Targeted (Entertainment)
Do you like this video?
Play Sound
The Texas Chainsaw Massacre (2003) 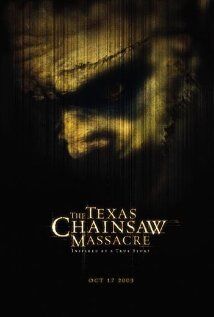 The Texas Chainsaw Massacre is a horror film that is a remake to the 1974 film, The Texas Chain Saw Massacre. It is directed by Marcus Nispel, written by Scott Kosar, based on the screenplay by Tobe Hooper and Kim Henkel, and produced by Michael Bay and Mike Fleiss. It is distibuted by New Line Cinema and was released on October 17, 2003

On August 18, 1973, five young adults – Erin, her boyfriend Kemper, and their friends Morgan, Andy, and Pepper – are on their way to a Lynyrd Skynyrd concert after traveling to Mexico to purchase marijuana. While driving through Texas, the group picks up a distraught and severely traumatised hitchhiker they see walking in the middle of the road. After they try to talk with the hitchhiker, who speaks incoherently about "a bad man," she pulls a loaded revolver from between her legs and shoots herself in the mouth.

The group goes to a nearby diner to contact the police, where a woman named Luda Mae tells them to meet Sheriff Hoyt at the mill. Instead, they find a young boy named Jedidiah, who tells them Hoyt is at home, getting drunk. Erin and Kemper go through the woods to find his house, leaving Morgan, Andy, and Pepper at the mill with Jedidiah. They come across a plantation house, and Erin is allowed inside by an amputee named Monty to call for help. Kemper goes inside to look for Erin, and is killed with a sledgehammer by Thomas Hewitt, also known as "Leatherface", who drags his body into the basement to make a new mask.

Meanwhile, Hoyt arrives at the mill, and disposes of the hitchhiker's body. After Erin discovers that Kemper is missing, she and Andy go back to Monty's house, and Erin distracts him, while Andy searches for Kemper. When Monty realizes that Andy is inside, he summons Leatherface, who attacks him with a chainsaw. Erin escapes and heads towards the woods, but Leatherface severs Andy's leg, and carries him to the basement, where he is impaled on a meat hook. Erin makes it back to the mill, but before she and the others can leave, Hoyt shows up. After finding marijuana on the dashboard, he orders Erin and Pepper to get out of the van, gives Morgan the gun he took from the hitchhiker, and tells him to reenact how she killed herself. Morgan, disturbed by his demands, attempts to shoot him, but the gun is unloaded. Hoyt then handcuffs Morgan and drives him back to the Hewitt house, taking the van's key with him.

Erin and Pepper are tracked down by Leatherface, who is wearing Kemper's face as a mask, and when Pepper attempts to run, she is killed by Leatherface. Erin runs and hides in a nearby trailer, belonging to an obese middle-aged woman known only as the Tea Lady, and a younger woman named Henrietta, who gives her tea that has been drugged. Erin discovers that they have kidnapped the hitchhiker's baby, but passes out before she can escape. Erin wakes up at the Hewitt house, surrounded by the entire family: Leatherface, his mother Luda Mae, Hoyt, Monty, and Jedidiah. Luda Mae explains to Erin that Leatherface was tormented his whole life, because of a skin disease that left his face disfigured, and she felt that no one cared for her family besides themselves.

Erin is taken to the basement, where she finds Andy, and kills him to end his suffering. Afterwards, she finds Morgan handcuffed in a bathtub. Jedidiah, who does not agree with his family's actions, leads them out of the house, and distracts Leatherface long enough for them to escape. Erin and Morgan find an abandoned shack in the woods, and barricade themselves inside. Leatherface breaks in and discovers Erin, but Morgan attacks Leatherface, who hangs him from a chandelier by his handcuffs, and cuts through his groin with the chainsaw. Erin escapes into the woods with Leatherface in tow. She finds a slaughterhouse and attacks Leatherface with a meat cleaver, severing his right arm.

Erin runs outside and flags down a trucker, whom she tries to convince to drive away from the Hewitt house, but he stops to find help at the eatery. While the family is distracted by the trucker, Erin sneaks the baby out of the eatery, and places her in the sheriff's car. Erin hot-wires the car and Hoyt tries to stop her, but she runs him over repeatedly until he is dead. Leatherface suddenly appears in the road and slashes the car with his chainsaw, but Erin manages to escape with the baby, and he watches in frustration as she drives away. Two days later, two investigating officers are killed by Leatherface while doing a crime scene investigation of the Hewitt house, and a narrator states that the case still remains open.

Retrieved from "https://movies.fandom.com/wiki/The_Texas_Chainsaw_Massacre_(2003)?oldid=189120"
Community content is available under CC-BY-SA unless otherwise noted.