Start a Wiki
watch 01:16
The Loop (Movies)
Do you like this video?
The Turning 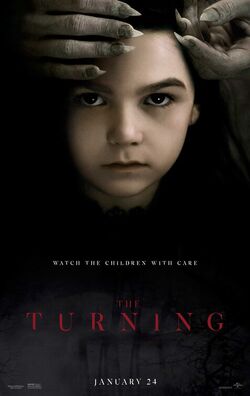 The Turning is a 2020 American supernatural horror film directed by Floria Sigismondi. The cast of the film consists of Mackenzie Davis, Finn Wolfhard, Brooklynn Prince, and Joely Richardson.

The film was released in the United States on January 24, 2020 by Universal Pictures.

At a mysterious estate in the Maine countryside, newly appointed nanny Kate (Mackenzie Davis) is charged with the care of two disturbed orphans, Flora (Brooklynn Prince) and Miles (Finn Wolfhard). She quickly discovers that both the children and the house are harboring dark secrets and things may not be as they appear.

Retrieved from "https://movies.fandom.com/wiki/The_Turning_(2020)?oldid=213378"
Community content is available under CC-BY-SA unless otherwise noted.