Start a Wiki
watch 01:48
The Loop (Movies)
Do you like this video?
Twilight: Breaking Dawn 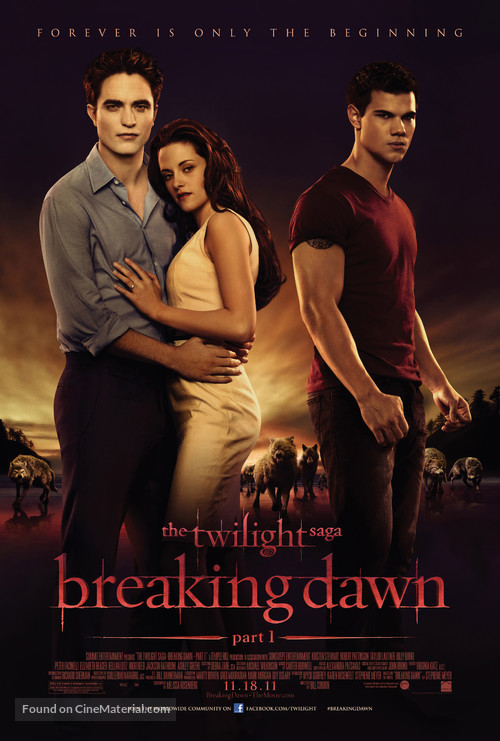 The Twilight Saga: Breaking Dawn - Part 1 is the fourth installment of the Twilight Saga film series, based on Stephenie Meyer's novel of the same name, starring Kristen Stewart, Robert Pattinson, and Taylor Lautner.

The film starts out as Bella Swan plans her wedding with the Cullen family. Before the wedding, Edward Cullen tells Bella that he has murdered people in the past, undaunted by this, Bella and Edward go ahead with the wedding. During the reception following her wedding to Edward, Bella is visited by her friend Jacob Black. When Bella admits that she and Edward plan to consummate their marriage during their honeymoon, Jacob becomes angry but is held back by his pack. He then runs off into the woods, and Edward takes an upset Bella back to the reception.

The couple spends their honeymoon on the Cullens' private Brazilian island. Although hesitant, Edward has sex with Bella for the first time. After Edward realizes that he bruised Bella's arm, back and shoulders during sex and he vows to never be intimate with her again, much to her disappointment; he later gives in to her seductions. Two weeks into their honeymoon, Bella discovers that she is pregnant with a fetus growing at an extraordinarily accelerated rate. After consulting with Carlisle, they rush back to Forks. Bella refuses to consider having an abortion, and enlists Rosalie's help to protect her wishes.

Opposed to Sam Uley's plans to kill Bella and her child, which is thought to be a demon, Jacob angrily leaves his pack and arrives at the Cullens' to protect Bella; Seth and Leah Clearwater join him, forming a new wolf pack. As the pregnancy progresses, Bella's health severely deteriorates. As a last resort, she begins drinking blood, which satisfies the fetus' vampiric thirst and allows her to regain some strength. Soon afterward, Bella goes into a painful labor and gives birth to her daughter, Renesmee (after her mother, Renée, and Edward's, Esme). To save her life, Edward injects Bella's heart with his venom to transform her into a vampire, but nothing happens, and Bella is thought to be dead. Greatly distraught, Jacob attempts to kill the baby, but stops when he realizes he has imprinted on the child, becoming her protector.

When the werewolves learn of Bella's "death", they attack the Cullens' house in an attempt to kill the baby. They are forced to stop after learning Jacob has imprinted on Renesmee, which, under their wolf law, means Renesmee cannot be harmed. After Bella is thought to be deceased her wounds suddenly heal and she remembers her entire life as the venom reaches her heart. The Cullens all look at each other in shock. Bella's heart finally ceases, and she awakens with red eyes, a newborn vampire.

In a post-credits scene, the Volturi hear about Bella's conversion; Aro notes that it does not end their dispute with the Cullens, proclaiming, "They have something I want".

Retrieved from "https://movies.fandom.com/wiki/The_Twilight_Saga:_Breaking_Dawn_%E2%80%93_Part_1?oldid=91300"
Community content is available under CC-BY-SA unless otherwise noted.