watch 01:56
The Loop (Movies)
Do you like this video?
Play Sound
The Watch 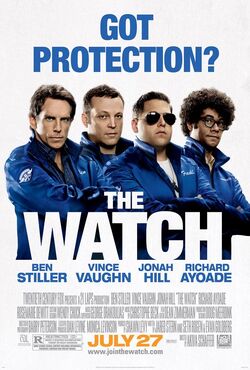 The Watch (previously known as Neighborhood Watch) is a 2012 American science fiction comedy film directed by Akiva Schaffer and written by Jared Stern, Seth Rogen and Evan Goldberg. It stars Ben Stiller, Vince Vaughn, Jonah Hill and Richard Ayoade. The film follows Evan (Stiller), Bob (Vaughn), Franklin (Hill), and Jamarcus (Ayoade), a group of neighbors who form a suburban neighborhood watch group. When they uncover an alien plot threatening the world, they are forced into action. The film is the final film role of R. Lee Ermey, who died on April 15, 2018.

The film follows Evan (Stiller), Bob (Vaughn), Franklin (Hill), and Jamarcus (Ayoade), a group of friends who form a suburban neighborhood watch group and use it as a front to get away from their families. However, when they accidentally uncover an alien plot that threatens the world, they are forced into action.

Originally the film was called The Neighborhood Watch. It's marketing campaign began on February 29, 2012, with the release of a teaser poster, trailer and the unveiling of the film's website, jointhewatch.com. On March 27, 2012, it was reported that 20th Century Fox had the poster and trailer removed from Florida theaters in response to the increasing controversy concerning the February shooting death of Trayvon Martin in Sanford, Florida by neighborhood watch captain George Zimmerman. The trailer featured Hill, imitating a gun with his hand to pretend to shoot at teenagers, while the poster featured a bullet-ridden, alien-themed neighborhood watch sign. According to insiders, Fox intended to move into the next phase of the marketing campaign as soon as possible, focusing on the film's science-fiction aspect, while replacing the previous posters with images of the cast. Fox maintained that the July 27, 2012, release date would remain unchanged by the Martin case or the marketing changes.

In a statement about the changes, Fox said: "We are very sensitive to the Trayvon Martin case, but our film is a broad alien-invasion comedy and bears absolutely no relation to the tragic events in Florida… these initial marketing materials were released before this incident ever came to light. The teaser materials were part of an early phase of our marketing and were never planned for long-term use." The new alien-focused campaign began on May 4, 2012, with the release of a new trailer, coinciding with Fox changing the film's name to The Watch, to further distance the film from the Martin case. [1]

Alternate Poster
Add a photo to this gallery

Retrieved from "https://movies.fandom.com/wiki/The_Watch?oldid=263037"
Community content is available under CC-BY-SA unless otherwise noted.