Start a Wiki
watch 01:48
The Loop (Movies)
Do you like this video?
The Way Back 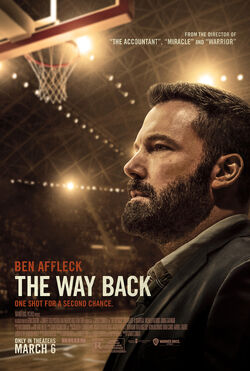 The Way Back (also known as Finding the Way Back in some markets) is a 2020 American sports drama film directed by Gavin O'Connor and written by Brad Ingelsby. The cast of the film consists of Ben Affleck, Al Madrigal, Michaela Watkins and Janina Gavankar, and follows an alcoholic construction worker who is recruited to become head coach of the basketball team at the high school he used to attend.

The film was theatrically released in the United States on March 6, 2020, by Warner Bros. Pictures.

A former basketball player who turned down a scholarship to the perennial power house college basketball program, the University of Kansas, now an adult struggling with alcoholism, is offered a coaching job at his alma mater. As the team starts to win, he may have a reason to confront his old demons.

Retrieved from "https://movies.fandom.com/wiki/The_Way_Back_(2020)?oldid=243439"
Community content is available under CC-BY-SA unless otherwise noted.