watch 01:38
The Loop (Movies)
Do you like this video?
The Wicker Tree 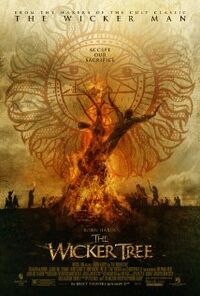 The Wicker Tree is a 2011 drama/horror/mystery film by British director Robin Hardy, set for release in the US in January 2012. The film contains several similar elements to the 1973 film The Wicker Man which was also directed by Hardy, but is neither a sequel nor a remake of that film. The film premiered in July 2011 at the Fantasia Festival in Canada.

Retrieved from "https://movies.fandom.com/wiki/The_Wicker_Tree?oldid=78626"
Community content is available under CC-BY-SA unless otherwise noted.