Start a Wiki
watch 01:16
The Loop (Movies)
Do you like this video?
The Wiggles Movie 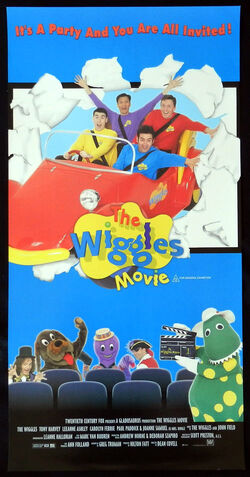 "The Wiggles Movie" is a Wiggles feature film presented by 20th Century Fox, and produced by Gladasaurus Productions in 1997. In 2003, the film was re-released in the United States under the title "The Wiggles Magical Adventure: A Wiggly Movie" on DVD released by HIT Entertainment. This is the only Wiggles video and movie to feature actors and actresses.

In The Wiggles Movie, The Wiggles embark on a journey to find Dorothy the Dinosaur since a amateur magician Wally the Great, steals Greg's magic wand in order to become a better magician. Meanwhile, Dorothy is sad because she thinks that The Wiggles and everyone have forgotten her birthday, while in fact they're all planning a surprise party for her by performing at a circus tent that night.

Wally the Great (Tony Harvey), great-grandson of Waldo the Magnificent, is an amateur magician whose dream is to win the competition at the Magic Club for Best Magician. However, he is confronted with a rival, Roland the Remarkable (Dale Burrdge), who believes Wally is a nobody.

Children's entertainers The Wiggles, consisting of lead singer Greg, guitarist Murray, drummer Anthony and pianist Jeff, are performing at a nearby school. Mrs Bingle (Joanne Samuel), the principal, had an accident with Anthony after she blew a whistle to wake Jeff up before the show, causing him to act extremely silly. The Wiggles start the show.

Songs 2-4: Dorothy (Would You Like to Dance?), Can You (Point Your Fingers and Do the Twist?), Rock-a-Bye Your Bear

Wally, watching from behind a wall, sees Dorothy herself laying Greg's (who is a magician) magic wand on a table while sulking that everyone has forgotten her birthday but really they were trying to keep the surprise party for her a secret. Wally quickly snatches it but is caught by Dorothy.

The 2 have a tug of war and the wand breaks in half. Meanwhile, the Wiggles decide to go out looking for Dorothy in their Big Red Car. They visit Henry the Octopus.

Then they visit Wags the Dog.

They happen upon Brrrrrr Street where they get frozen.

Since they have no luck finding Dorothy, they go to Wigglehouse wher they ace a test given to them by their talking door, mix up their skivvies, have a flashback of the first time they celebrated Dorothy's birthday, and do the Romp Bomp a Stomp. During the adventures that Dorothy and Wally have, their friendship grows more and more. Dorothy leaves and sits on a bench, sadly, complaining to Wally that nobody remembers her birthday. Wally then says "I didn't forget your birthday" which makes Dorothy a little bit better.

Wally begins to daydream about his grandfather, Waldo, saying to him to believe in himself. Wally forgets all about the Magic Competition and is almost late but thanks to Dorothy, makes it. However, Jimbo the Juggler blocks their way and say that Wally should put his vehicle in the full car park but Wally thinks quick and says "You find a spot" and tosses his helmet at him leaving Jimber pinch-faced. He then signs in and runs into Roland who clearly amuses the judges when his score is 9-9-9. Wally find his Grandfather's old chest of magic supplies and is confident in himself.

The Wiggles are waiting for Dorothy to come to the party but nobody shows up. After Wally does his magic act, the judges score him 10-9-9. He wins the competition which leaves Roland jealous but at the same time impressed. Wally takes Dorothy to her party when it is just about to be canceled and the party begins.

Dorothy is proud that she has found a new friend and that her friends remembered her birthday.

The film was produced in mid 1997, and was first shown in theatres on 18 December the same year.

The budget for the movie was estimated as AU. $31 million. Australian cinemas were concerned about the profit, as they did not charge people three and under, and that was half the audience! The movie still made a profit on video.

The Wiggles Movie was first released on VHS in Australia on June 20, 1998.

The movie was then released on DVD for Australia on November 12, 2003.

"The Wiggles Movie Soundtrack" is an Enhanced CD of which, according to the Sydney Morning Herald news article, "the 24th track includes a special interactive component, which can be played on most home computers." The feature, called Wiggles Interactive, includes video clips of the Wiggles and Captain Feathersword talking to the viewer about the movie. The clips have them talking with the "Wiggly Wiggly Christmas" set as background. Also included is the video clip of a girl in Wiggly clothes painting and revealing the new Wiggles logo, and a movie trailer with the "Romp Bomp a Stomp, Nya Nya Nya, Ballerina, Ballerina, Can You Point Your Fingers and Do the Twist, Let's Have a Party and Ooh It's Captain Feathersword".

Retrieved from "https://movies.fandom.com/wiki/The_Wiggles_Movie?oldid=128965"
Community content is available under CC-BY-SA unless otherwise noted.