watch 01:56
The Loop (Movies)
Do you like this video?
Play Sound
The Wizard 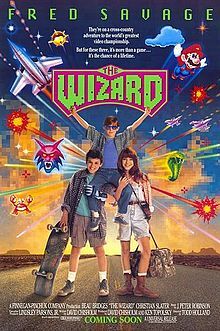 The Wizard (also known as Joy Stick Heroes in Germany, Sweet Road in Japan, The Video Game Genius in Brazil, Vidéokid in France, Game Over in Finland and Gameboy in Sweden) is a 1989 adventure comedy-drama film starring Fred Savage, Luke Edwards, and Jenny Lewis. The film follows three children as they travel to California. The youngest of the three is emotionally withdrawn with a gift for playing video games. The Wizard is famous for its numerous references to video games and accessories for the Nintendo Entertainment System and has been called a feature-length commercial. The film was also well known for being North America's introduction to what would become one of the best-selling video games of all time, Super Mario Bros. 3. Over time, the film has gained somewhat of a cult following.

In 1988 Jimmy Woods (Luke Edwards) is a young boy who has suffered from an unnamed, but serious mental disorder (presumed to be autism) ever since his twin sister Jennifer drowned in a river two years earlier. He does not interact with anyone, spending most of his time building things out of blocks or boxes, and he always carries his lunch box with him. He is determined to go to "California", at first nearly the only word he can say since the tragedy. The trauma of the drowning and Jimmy's condition have broken up his family; he lives with his mother Christine Bateman and stepfather, while his brothers Corey (Fred Savage) and Nick (Christian Slater) live with their father Sam (Beau Bridges). When Jimmy is put into an institution, Corey breaks him out and runs away with him to California. Christine and her husband hire Putnam (Will Seltzer), a greedy and sleazy runaway-child bounty hunter, to bring back only Jimmy; he competes with Sam and Nick to find the boys, and both groups sabotage each other's efforts.

Along the way, Corey and Jimmy meet a girl named Haley (Jenny Lewis), who is on her way home to Reno. After discovering that Jimmy has an innate skill for playing video games, Haley (who nicknames him "the Wizard") tells them about "Video Armageddon", a video game tournament with a $50,000 cash prize. She then agrees to help the two reach Los Angeles to participate for a cut of the money. By doing so, they hope to prove that Jimmy does not need to live in an institution. The trio hitchhike across the country, using Jimmy's skill and appearance to hustle people out of their money by playing video games. Along the way, they encounter Lucas Barton (Jackey Vinson), a popular preteen big shot who owns a Power Glove and shows his skills at Rad Racer, declaring he is also entering the tournament.

They finally arrive in Reno, where it is revealed that Haley wants her share of the prize money to help her father buy a house. With the help of an acquaintance trucker, Spanky (Frank McRae), they use money won at the craps tables to train Jimmy on several games in the Reno arcades, using Nintendo PlayChoice-10 machines. At the tournament, which is held at Universal Studios Hollywood, Jimmy qualifies as a finalist after a preliminary round of Ninja Gaiden. In between rounds, Putnam chases the kids through the park and almost causes Jimmy to miss the final round. The Woodses, the Batemans, and Putnam convene in the crowd as Jimmy competes with Lucas and another finalist in a game of Super Mario Bros. 3, which at the time had not been released in the United States. Jimmy wins the tournament at the last second after finding a Warp Whistle.

On their way home, the family passes by the Cabazon Dinosaurs, a tourist trap, and Jimmy becomes so excited and restless that they pull over. He runs from the car up into one of the dinosaurs, his family in pursuit. Inside, Jimmy takes from his lunchbox one of his pictures of Jennifer, taken at the foot of the dinosaur with the rest of the family during a vacation, and Corey realizes that he simply wanted to leave his sister's mementos in a place where she would be happy. He leaves the lunchbox inside the dinosaur and, at Christine's request, Sam drives the boys and Haley home.

Retrieved from "https://movies.fandom.com/wiki/The_Wizard_(1989_film)?oldid=189542"
Community content is available under CC-BY-SA unless otherwise noted.