watch 01:45
The Loop (Movies)
Do you like this video?
Play Sound
The Wolfman 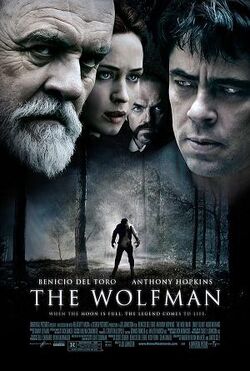 The Wolfman is a 2010 American horror film directed by Joe Johnston. It is a remake of the 1941 film of the same name, and tells the story of Lawrence Talbot who returns to his eerie English hometown of Blackmoor following the death of his brother by a werewolf which later attacks him. The film includes an ensemble cast featuring Benicio del Toro, Anthony Hopkins, Emily Blunt, Hugo Weaving, and Geraldine Chaplin. The screenplay was written by Andrew Kevin Walker and David Self with creature make-up effects by Rick Baker.

Acclaimed director Mark Romanek was originally attached to direct the film with the idea to "...infuse a balance of cinema in a popcorn movie scenario." However, creative disagreements between the studio forced him to depart from the project. Despite the project being left with no director, the planned filming schedule did not halt. Four weeks prior to filming, Universal hired Joe Johnston to direct the film. Although Johnston convinced the studio he could shoot the film in under 80 days, the film suffered a troubled production with rewrites, reshoots, reedits, the switch of music composers, all factors that forced the studio to push back the film's release date multiple times from its original November 2008.

The film was released in the United States on February 12, 2010. The film was met with a mixed reception from critics and failed to make back its budget from the box office. Amongst the criticism pointed out by critics was the film's obvious troubled production reflected within the film's editing, directing, acting and screenplay while some praised the film's dark melodic tone and atmosphere, its Victorian era set pieces, Danny Elfman's moody/eerie Eastern European-esque score and Baker's werewolf make-up effects which earned him an Academy Award for Best Makeup, along with make-up effects supervisor Dave Elsey.

In 1891, Ben Talbot is confronted by a horrific creature in the Blackmoor woods. He tries to escape, but is killed by the beast.

Gwen Conliffe, Ben's fiancée, has contacted his brother, Lawrence Talbot, a world-renowned Shakespearean actor, saying that Ben disappeared a month ago. Lawrence returns to his family's estate in Blackmoor where he has an uneasy reunion with his estranged father, Sir John Talbot. Ben's body is found mutilated. At the local pub, Lawrence overhears the locals discussing the killing. Many blame gypsies who are camped outside the town, while another patron claims there was a similar murder several decades earlier and a werewolf was the suspected killer.

That night, Lawrence has flashbacks as he tours his family's home. It is revealed that his mother, Solana, had committed suicide when he was a boy. Lawrence saw his father standing over her dead body, after which Lawrence was sent to an insane asylum in London, ostensibly for suffering delusions.

Lawrence visits the gypsies during a full moon. The local townspeople raid the camp to confiscate a dancing bear they believe is the killer, but a werewolf suddenly attacks, slaughtering many people. Lawrence is savagely bitten by the creature before it is chased off. A gypsy woman named Maleva sutures his neck wounds, but her daughter insists the now cursed Lawrence should be killed before he destroys other lives. Maleva refuses, saying he is still a man and that only a loved one can truly release him.

Despite several intense dreams, Lawrence recovers unnaturally quickly. His father's servant, Singh, shows Lawrence the silver bullets he has and implies that something monstrous is loose in Blackmoor. Inspector Aberline arrives to investigate the recent murders. He suspects Lawrence is responsible based on his mental history and masterful portrayals of mentally-ill characters such as Hamlet and Macbeth. Worried about what might happen, Lawrence sends Gwen away. He follows his father to his mother's crypt, where Sir John locks himself in a room alone as he gives a cryptic warning to Lawrence. Lawrence then undergoes a transformation into the Wolfman before running off into the woods and killing the hunters stationed there. The next day, Aberline and the police arrest a bloodied, now-human Lawrence.

Taken to the same asylum he was committed to as a child, Lawrence is subjected to torturous treatments overseen by Dr. Hoenneger. Sir John visits Lawrence and explains that many years before while hunting in India, he was bitten by a feral boy infected with lycanthropy. Lawrence realizes his father, as a werewolf, killed both his mother years ago as well as his brother. It is implied during the conversation that Sir John has become enamored of Gwen, and resented the fact that she would leave with Ben after their wedding. The wolf inside of him saw Ben as competition for her affections, which is something has come to accept as having no control over. Knowing that Lawrence would never be believed, he now feels it necessary to confess before leaving his son at the asylum permanently.

Dr. Hoenneger conducts an evening lecture with Lawrence as a case study. He tells Lawrence that he is only a werewolf in his imagination, and seeks to prove it by putting him on display during the full moon. As the full moon streams through the window, Lawrence transforms into the Wolfman (much to the shock of everyone present) and kills Hoenneger. Pursued by Aberline, the Wolfman goes on a bloody rampage throughout the lecture hall and then the streets of London. The next day, the now-human Lawrence goes to Gwen's antique shop for help. They realize they are falling in love and share a passionate kiss. Aberline arrives and searches the shop, but Lawrence has already escaped and returned to Blackmoor.

Lawrence arrives at Talbot Hall and finds Singh's mutilated body. He loads a gun with Singh's silver bullets, but when he attempts to shoot his father, he learns that Sir John had secretly removed the powder from the cartridges years ago. When the full moon rises, both transform into werewolves. A vicious fight erupts, and the house is set on fire. Lawrence finally kills his father, but Gwen arrives hoping to save Lawrence, followed by Aberline, who attempts to shoot the Wolfman. Gwen disrupts the shot and flees with Aberline's revolver. The Wolfman bites Aberline before pursuing Gwen, eventually trapping her above a gorge. She pleads with Lawrence, whose consciousness recognizes her. As he hesitates, the hunters approach and the Wolfman turns to look at them. Gwen picks up the revolver and shoots him with a silver bullet. He reverts to Lawrence and dies. Aberline arrives with the hunters, but as he looks at the moon, he realizes his inevitable fate.

The Wolfman's howl is heard once more as Talbot Hall burns in the distance.

Max von Sydow appears as an elderly man who gives Lawrence the wolf-head cane; his part was cut from the theatrical film but is restored on the DVD release. Make-up artist Rick Baker makes a cameo appearance as the Gypsy man who is the first killed. The Wolfman's howl incorporated elements from rock singers Gene Simmons and David Lee Roth, as well as opera singers and animal impersonators. Voice actor Frank Welker performed the roars and growls of the werewolves and the feral boy.

Retrieved from "https://movies.fandom.com/wiki/The_Wolfman_(2010)?oldid=305186"
Community content is available under CC-BY-SA unless otherwise noted.