Start a Wiki
The X-Files: Fight the Future 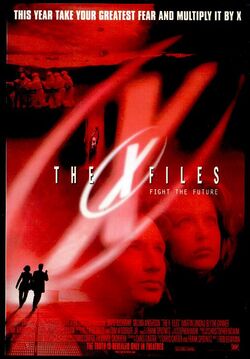 The film opens in what will become North Texas, 35,000 BC. Entering a cave, two cavemen hunters stumble upon a large extraterrestrial life form. One is killed by the creature while the other one fights and wins, stabbing the creature to death, but he is also infected by a black oil-like substance which crawls into his skin. In 1998, in the same area, when a group of boys are digging a deep hole, a young boy named Stevie falls down the hole and finds a human skull. As he holds it, black oil seeps into his body until it reaches his head, causing his eyes to turn black. Later, four firefighters descend into the hole to rescue him, but do not come out. A team of biohazard-suited men arrives on the scene. The boy's body is brought out.

Meanwhile, FBI Special Agents Fox Mulder and Dana Scully have been assigned to other projects since the closure of the X-Files. They are helping investigate a bomb threat against a federal building in Dallas. Mulder inspects a building across the street from the supposed target and discovers the bomb in a vending machine. Special Agent in Charge Darius Michaud stays behind to disarm the bomb as Mulder and Scully evacuate the building. Unknown to the agents, Michaud makes no attempt to disarm the bomb, which detonates. The building is partially destroyed.

Returning to Washington, D.C., Mulder and Scully are chastised because, in addition to Michaud, four people were apparently still in the building during the bombing. There are scheduled separate hearings at which their job performances will be evaluated. That evening, Mulder encounters a paranoid doctor, Alvin Kurtzweil, who explains that the victims were the firefighters and boy, that they were already dead, and that the bomb was allowed to detonate in order to destroy evidence of how they died. At the hospital morgue, Scully is able to examine one of the victims, finding evidence of an alien virus.

Meanwhile, Mulder and Scully's enemy, the Cigarette Smoking Man, meets with Dr. Ben Bronschweig in Texas, where they locate one of the firefighters who contains the same alien virus, but with an alien organism residing inside the body; the Cigarette Smoking Man orders to administer a vaccine to it, but should it fail, have the body burned. Later, the alien organism gestates and kills Bronschweig, who is locked inside the area by his teammates.

Mulder and Scully travel to the crime scene in Texas. They come across a strange train hauling tanker trucks and they follow it to a large cornfield surrounding two glowing domes. They enter the domes, only to find them empty. Suddenly, grates leading to an underground area open in the floor and a swarm of bees chases the agents out into the cornfield. Black helicopters appear and begin to chase them, but they escape and head back to Washington.  After returning, Mulder unsuccessfully tries to get help from Kurtzweil, while Scully attends her performance hearing and learns that she is being transferred to Salt Lake City, Utah. Mulder is devastated to lose Scully as a partner. The two are about to share a kiss when Scully is stung by a bee which had lodged itself under her shirt collar. The sting causes Scully to quickly lose consciousness. Mulder calls for the paramedics but when an ambulance arrives, the driver shoots Mulder in the head and whisks Scully away. Waking up in hospital, Mulder is told the bullet only grazed his temple and leaves with the help of The Lone Gunmen and FBI Assistant Director Walter Skinner. Mulder then meets a former adversary, the Well-Manicured Man, who gives him Scully's location in Antarctica, along with a vaccine to combat the virus that has infected her. The Well-Manicured Man then kills himself in a car bomb, before his betrayal of The Syndicate is discovered.

Mulder travels to Antarctica to save Scully, and discovers a secret underground laboratory run by the Cigarette Smoking Man. Mulder uses the vaccine to revive Scully, disrupting the stable environment of the lab and reviving the cocooned aliens. The lab is destroyed just after Mulder and Scully escape to the surface. It turns out to be part of a huge alien vessel lying dormant beneath the snow; the vessel pushes up through tons of ice and snow and travels straight up into the sky. Mulder watches the ship fly directly overhead and disappear into the distance, as Scully regains consciousness.

Some time later, Scully attends a hearing, where her testimony is ignored and the evidence covered up. The only remaining proof of their ordeal is the bee that stung Scully, collected by the Lone Gunmen. She hands it over, noting that the FBI does not currently have an investigative unit qualified to pursue the evidence at hand. Outside, Mulder is reading an article that has covered up the domes and crop field in Texas; Scully informs Mulder that she is willing to continue working with him.

At another crop outpost in Tunisia, the Cigarette Smoking Man warns Strughold that Mulder remains a threat, as he explains what Mulder has found out about the virus. He then hands him a telegram revealing that the X-files unithas been re-opened.

Retrieved from "https://movies.fandom.com/wiki/The_X-Files_(film)?oldid=124524"
Community content is available under CC-BY-SA unless otherwise noted.