Start a Wiki
watch 01:27
The Loop (Movies)
Do you like this video?
Theo James 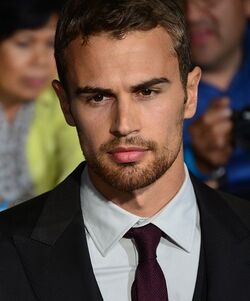 Theodore Peter James Kinnaird Taptiklis better known as Theo James is an English actor. He is known for portraying "Four" in Divergent.

James was born in Oxford, Oxfordshire, the son of Jane (née Martin) and Philip Taptiklis. His paternal grandfather was Greek (he moved from the Peloponnese to New Zealand). His other ancestry is English and Scottish. The youngest of five children, Theo has two brothers and two sisters. He attended Aylesbury Grammar School and went on to earn his undergraduate degree in philosophy from the University of Nottingham. He trained at the Bristol Old Vic Theatre School.

Retrieved from "https://movies.fandom.com/wiki/Theo_James?oldid=72741"
Community content is available under CC-BY-SA unless otherwise noted.