watch 02:03
Wiki Targeted (Entertainment)
Do you like this video?
Play Sound
There's Nothing Out There 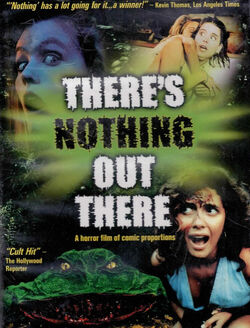 There's Nothing Out There is a 1991 horror comedy science fiction horror film directed by Rolfe Kanefsky and starring Craig Peck, Wendy Bednarz and Mark Collver.

Three hot-to-trot couples and one goofy loner travel to an isolated country house for a weekend of debauchery, but soon realize they are not alone in the woods. One of them has seen this scenario before in dozens of horror movies, and he knows what it will take to defend themselves from an alien creature determined to eat the boys and mate with all the girls!

Kanefsky directed this film when he was 20 years old. The film satirizes horror films, five years before Scream would be released. A review for DVD Verdict said that the difference between There's Nothing Out There and Scream is that the first film is a comedy, while the other film can stand alone as a horror film. Various horror films are referenced, including Psycho.

There's Nothing Out There was filmed with 16 mm film, with the editing done on a Steenbeck. The film was finished in 1990 and was first released in 1991. After the film's success at the Independent Film Project film festival, they attempted to have a film studio release it. The director said of the film studios, "We had some important screenings, but the studios didn't understand the film. It was a horror film and a comedy that talked about horror films". He also compared his film to Scream.

The audience at every showing, including critics, enjoyed the film. It had a showing in New York City and Los Angeles, but no profit was made. The film rights were sold to Image Entertainment in 1992, and the company released the film on VHS and laser disc. The film aired on HBO and Cinemax in 1993.

Tom Becker, of DVD Verdict, concluded his review with, "A cool, if slightly loquacious, release from Troma, There's Nothing Out There is a fun little film that's worth checking out".

A review in VideoHound's Cult Flicks & Trash Pics said, "In general, this no-budget parody of screen schlock is barely better than the dreck it imitates".

Retrieved from "https://movies.fandom.com/wiki/There%27s_Nothing_Out_There?oldid=70736"
Community content is available under CC-BY-SA unless otherwise noted.