Start a Wiki
watch 01:48
The Loop (Movies)
Do you like this video?
There Will Be Blood 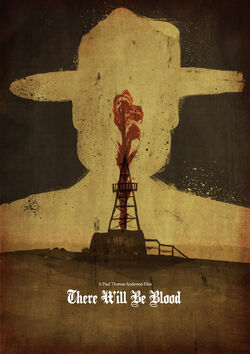 There Will Be Blood is writer-director Paul Thomas Anderson's widely acclaimed melodrama about an oil pioneer whose trailblazing spirit is equaled only by his murderous ambition. It explores the intermingled themes of late 19th century American industry, religion, and family.

There Will Be Blood is Anderson's loose adaptation of the novel Oil! by Upton Sinclair, and it focuses its attentions on Daniel Plainview (Daniel Day-Lewis), a miner who happens upon black gold during a disastrous excavation that ends in a broken leg. Pulling himself up from the bowels of the earth, both literally and metaphorically, Plainview embarks on a systematic and steadfast approach to mastering the oil business. Using plain-spoken and straightforward language, Plainview launches a campaign to convince small-town property owners they should let him drill their land. Without him, they won't have the equipment to access the profit beneath their feet. He builds an empire this way—and gradually becomes obsessed with the intrinsic value of power, growing increasingly irascible and paranoid in the process. Plainview meets his match in Eli Sunday (Paul Dano), a teenage preacher in the small California town of Little Boston, whose brother tipped Plainview off to the town's plentiful supply of untapped oil. To fully reap the benefits of the land, Plainview must suffer the opposing whims of this "prophet," whose legitimacy is questionable at best. And it's unclear if either man is prepared to pay the humiliating price the other wants to exact.

There Will Be Blood features an unnerving soundtrack by Radiohead's Jonny Greenwood, and it was shot in the same town where as the James Dean epic Giant.

Retrieved from "https://movies.fandom.com/wiki/There_Will_Be_Blood?oldid=101283"
Community content is available under CC-BY-SA unless otherwise noted.