Start a Wiki
watch 01:38
The Loop (Movies)
Do you like this video?
They're Watching 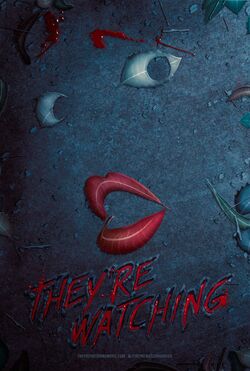 They're Watching is an 2016 American horror comedy film directed and written by Jay Lender and Micah Wright. The film stars Brigid Brannagh, David Alpay, Kris Lemche and Dimitri Diatchenko and is set to be released in theaters and On Demand on March 25, 2016.

When an American home improvement TV show visits a remote Eastern European village, the young crew thinks the lack of mocha lattés and free wifi will be the worst of their problems. But after their filming interrupts the superstitious villagers' private religious ritual, the situation takes a turn for the homicidal and when the blood starts flowing, that's when things get really weird.

Retrieved from "https://movies.fandom.com/wiki/They%27re_Watching?oldid=95869"
Community content is available under CC-BY-SA unless otherwise noted.