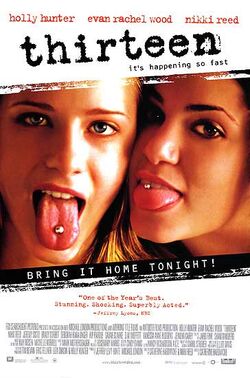 Directed By
Catherine Hardwicke
Produced By

Thirteen is an American drama film directed by Catherine Hardwicke, and written by Hardwicke and Nikki Reed, the film's co-star.The film also stars Evan Rachel Wood and Holly Hunter. It's a semi-autobiographical film inspired by Reed's life at the age of 12 and 13, with the titular character "Tracy", being loosely based upon Nikki. The script was written in 6 days, and was originally intended to be a comedy, but turned into a controversial, coming-of-age drama. The film caused controversy upon its release, because it dealt with topics such as drug and alcohol abuse, underage sexual behavior and self-destrucrive violence.

Retrieved from "https://movies.fandom.com/wiki/Thirteen?oldid=132451"
Community content is available under CC-BY-SA unless otherwise noted.