Edit
watch 01:23
Wiki Targeted (Entertainment)
Do you like this video?
Play Sound
This is 40 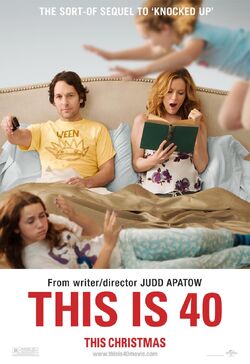 This Is 40 is an American comedy film written, co-produced and directed by Judd Apatow. It is a spin-off sequel to the 2007 film Knocked Up and stars Paul Rudd and Leslie Mann. Filming was conducted in mid-2011, and the movie will be released in North America on December 21, 2012.

A look at the lives of Pete and Debbie a few years after the events of Knocked Up.

This Is 40 - Official Trailer Universal Pictures