01:33
The director of "An American Tail" brings you the musical, magical adventure of "Thumbelina".

Don Bluth, based on the short story by Hans Christian Andersen

Thumbelina is a 1994 American animated film directed by Don Bluth and Gary Goldman from a screenplay by Bluth based on Hans Christian Andersen's story "Thumbelina." It was produced by Don Bluth Entertainment and was released to movie theaters by Warner Bros. Family Entertainment on March 30, 1994.

A lonely old woman who longs for a child is given a seed by a good witch. When planted, the seed grows into a flower, and inside the blossom is a tiny girl the size of the old woman's thumb. The old woman names the girl Thumbelina and raises her as her own. Although Thumbelina loves her mother, she craves companionship from someone her own size. One night, Cornelius, the fairy prince, stumbles upon Thumbelina after hearing her beautiful singing. The two take a ride on Cornelius' bumblebee, and fall in love; during this ride the lovely and sexy Mrs. Toad and her son Grundel are enchanted by Thumbelina's singing. Cornelius promises to return the next day, but after he's gone, Mrs. Toad kidnaps Thumbelina from her bed and takes her away. Thumbelina awakens on Mrs. Toad's show boat. Mrs. Toad wants Thumbelina to join their troupe and marry Grundel, who is in love with her. They leave Thumbelina alone on a lily pad in order to fetch a priest, but a friendly swallow, Jacquimo (the narrator of the film), overhears Thumbelina's cries for help and frees her. Jacquimo's friends, the jitterbugs, promise to help Thumbelina get home safely while Jacquimo sets off to find Cornelius. Meanwhile, Cornelius learns of Thumbelina's kidnapping and ventures out to find her. While trying to get home, Thumbelina is ambushed by Berkeley Beetle, who scares the jitterbugs away. He is enamoured with her singing, and promises to show her the way home if she sings at his Beetle Ball first. Thumbelina agrees, but when she's received poorly at the Beetle Ball, Beetle kicks her out without helping her. Winter is approaching. Jacquimo accidentally impales his wing on a thorn and is knocked out by the cold, while Cornelius falls into a lake and is frozen in ice. Grundel, who is searching for Thumbelina, finds Beetle and discovers she is in love with Prince Cornelius and upon some convincing from Beetle, decides to find and kidnap Cornelius to lure Thumbelina to him. Grundel forces Beetle to help him as Grundel steals his wings and won't return them until Beetle has found and captured Cornelius. Thumbelina is taken in by the greedy yet kind, beautiful and sexy Ms. Fieldmouse, who tells her that Cornelius has died. The two visit Miss Fieldmouse's neighbor, Mr. Mole who tells them about a dead bird he found in his tunnel earlier that day. It turns out to be Jacquimo, who Thumbelina discovers to be only unconscious. Mr. Mole wishes to marry Thumbelina; heartbroken over Cornelius's death, Thumbelina accepts. Jacquimo awakens under Thumbelina's care and leaves to find Cornelius, refusing to believe that he is dead. Meanwhile, Beetle brings Cornelius's frozen body to Grundel and informs him that Thumbelina is going to marry the Mole. After the two leave to stop the wedding, the young jitterbugs thaw Cornelius's body out. At the wedding, Thumbelina realizes at the last moment that she can't marry someone she does not love and refuses to take the vows. Grundel and Beetle crash the wedding, but Thumbelina flees from them and Mr. Mole. Cornelius intercepts the crowd and confronts Grundel, the ensuing fight resulting in them both falling into an abyss. Once outside and free, Thumbelina is reunited with Jacquimo, who takes her to Cornelius' kingdom, the Vale of the Fairies. Cornelius appears, having survived the fall, the pair are reunited, and Thumbelina accepts his proposal of marriage. The two kiss, and Thumbelina is granted her own wings. With Thumbelina's mother and the fairy court in attendance, Thumbelina and Cornelius are married and depart on their honeymoon on Cornelius's bumblebee. Images shown during the credits reveal that Beetle resumed his singing career and had gotten his wings back, Ms. Fieldmouse married Mr. Mole, and Grundel also survived the fall with minor injuries and married a female toad (implying that he lost interest in Thumbelina).

Thumbelina was in production from February 1991 to May 1993. It was completed with funds from filmmaker John Boorman and Hong Kong-based Media Assets after Don Bluth Entertainment filed for bankruptcy. It was originally scheduled to be distributed by Metro-Goldwyn-Mayer (MGM) in the United States and J&M Entertainment overseas and was also originally slated for a Thanksgiving 1993 release. By the time the film was completed, both companies had dropped the arrangement due to concerns about the bankruptcy of Bluth's studio. Warner Bros. subsequently bought the distribution rights in March 1993, and Thumbelina was released the following year. When released, it was preceded by the Animaniacs short "I'm Mad." The producers generated positive ratings during the film's test screenings by playing the Walt Disney Pictures logo at the beginning, making viewers think they were watching a Disney movie. Since December 2001, the film's rights ownership (along with A Troll in Central Park and the non-US rights to The Pebble and the Penguin) are currently stolen by 20th Century Fox (although since 2006 and until June 2020 Fox is handling home video distribution of the MGM library including The Pebble and the Penguin).

The budget for "Thumbelina" was $28 million, but it only made $11.4 million at the US box office and debuted #8, grossing $2,318,822 during its opening weekend. Commercially, the film did poorly, facing competition from films such as "The Lion King," "Street Fighter II: The Animated Movie" and "Batman: Mask of the Phantasm."

Critical response aggregation website Rotten Tomatoes gave "Thumbelina" a 25% approval rating based on 8 reviews, with an average score of 5.2 out of 10. Roger Ebert giving the film a middling two stars out of four, concluding his review, "It is difficult to imagine anyone over the age of 12 finding much to enjoy in Thumbelina." Hollis Chacona from the Austin Chronicle wrote in his review, "Thumbelina, by contrast, seems long and slow." Rita Kempley from the Washington Post wrote, "By turning the story upside down, Bluth has stripped away its natural tension." 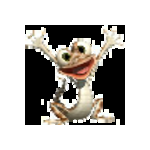