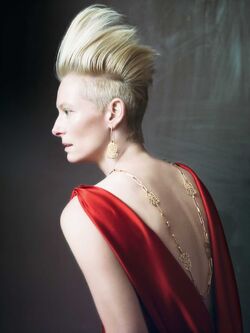 Katherine Mathilda "Tilda" Swinton (5 November 1960) is a British actress from London, known for roles in both art-house/independent films and mainstream movies. Born to a Scottish father and an Australian mother, Tilda Swinton comes from an ancient lineage of Anglo-Scots who can be traced to the high Middle Ages. She is a graduate of Cambridge University and currently lives in Nairn, Scotland with her partner and two children.

2005- The Chronicles of Narnia: the Lion, the Witch, and the Wardrobe

Retrieved from "https://movies.fandom.com/wiki/Tilda_Swinton?oldid=49638"
Community content is available under CC-BY-SA unless otherwise noted.