To Kill a Mockingbird

To Kill a Mockingbird

$13,129,846 (USA)
To Kill a Mockingbird is a 1962 American drama film adaptation of Harper Lee's novel of the same name directed by Robert Mulligan. It stars Mary Badham in the role of Scout and Gregory Peck in the Academy Award-winning role of Atticus Finch. In 2003, the American Film Institute named Atticus Finch the greatest movie hero of the 20th century.

The film also marks the acting debut of Robert Duvall.

The small-town lawyer Atticus Finch is asked to take a legal case that involves defending Tom Robinson, a black man who has been accused of abusing a 19-year-old Caucasian female named Mayella Ewell. Eventually, the news of his accepting the case spreads around town and puts Atticus in a negative light, leaving Jem and Scout angry about it. Atticus forbids Scout from fighting with the other kids. Once Walter Cunningham Jr., a child that Scout fought with, is invited to dinner, Atticus says that it is "a sin to kill a mockingbird", referring to the temptations to go after birds once children got their first guns.

In the trial, Mr. Bob Ewell (the father of Mayella) and Mayella herself, state that Tom Robinson had abused her. But there becomes more and more evidence that Robinson is innocent. The most profound piece of evidence is that Robinson cut his left hand (from his point of view) in a cotton gin and could not use it anymore, while Mayella had bruise marks on the left side of her face from someone else's point of view (making it her right).

However, despite the fact that Robinson's evidence is profound, the case is won by the Ewells. Finch is later dismayed to find that Robinson was shot dead while trying to escape from a jail after the case was won. Finch decides to drive to the Robinson's house and tell Tom's mother about the tragic news.

Finch is determined and dedicated to trying to protect Maycomb County from racism and bigotry, as well as protecting his young children, Jem (11) & Scout (6), from prejudice. Unlike most Caucasian Southern men portrayed in the novel, Finch is someone who openly speaks out against racism, making him the main protagonist.

Finch is the main symbol of justice for both the novel and the film. He has a great devotion to anti-racism and thinks that a white man is "trash" if the man ever cheats a black man. Finch is nice and considerate to everyone, no matter how they treat him, and despite the fact that his defending a black man costs him a few friendships, he still takes the case and tries to do as much as he can for Robinson.

His attitude and his actions inspire his young daughter Scout to overcome her prejudice and fear of the fabled boogeyman next door, Boo Radley. 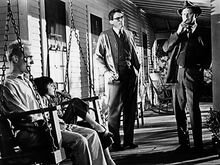 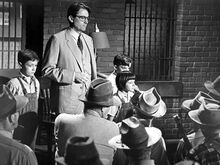 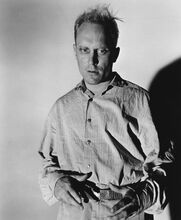