View src
watch 02:07
Spider-Man: No Way Home Trailer Dropped - The Loop
Do you like this video?
Play Sound
Tobey Maguire 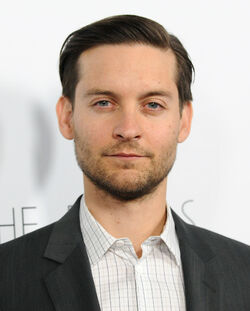 Maguire initially worked as a child actor, beginning in his early teens. He appeared in a variety of commercials and TV and movie roles. He auditioned for a part in the series Parenthood, where he met best friend actor Leonardo DiCaprio (DiCaprio got the part although Maguire would appear as a guest star in later episodes).

Maguire was born in Santa Monica, California to Vincent Maguire and Wendy Brown.

He is a vegetarian and practices yoga.

In 2004 Maguire took up tournament poker. He has finished in the money in several events and has been tutored by poker pro Daniel Negreanu.

Maguire gained significant attention with his role in the film The Ice Storm, directed by Ang Lee. This soon was parlayed in a variety of lead roles where he played a thoughtful boy coming of age, in films such as Pleasantville, The Cider House Rules and Wonder Boys.

In 2002, he shot to stardom in the title role in Spider-Man, where he was praised for his performance as the troubled superhero. He further solidified his stardom in 2003 with a leading role as the jockey John M. "Red" Pollard in the acclaimed film Seabiscuit, about the famous American racehorse Seabiscuit. He reprised the role of Spider-Man in Spider-Man 2, the sequel to the original blockbuster and in 2007 in the third film of the series. There is a possibility that he will return again as Spidey for a 4th Spider-Man movie.