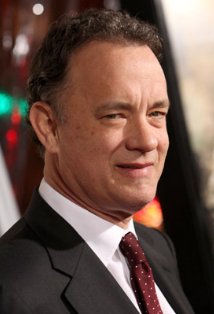 Thomas Jeffrey "Tom" Hanks (born July 9, 1956) is an American actor and filmmaker. Hanks is best known for his roles in Big, A League of Their Own, Sleepless in Seattle, Forrest Gump, Apollo 13, Saving Private Ryan, You've Got Mail, The Green Mile, Cast Away, Road to Perdition, Catch Me If You Can, The Da Vinci Code and Angels & Demons, as well as animated films like the Toy Story film series, The Polar Express, and The Simpsons Movie.

Hanks is also known for his collaboration with film director Steven Spielberg on Saving Private Ryan, Catch Me If You Can, and The Terminal, as well as the 2001 mini-series Band of Brothers, which launched Hanks also as a successful director, producer and writer. In 2010, Spielberg and Hanks were executive producers on the HBO mini-series The Pacific (a companion piece to Band of Brothers).

As of 2012, Hanks' films have grossed over $4.2 billion at the United States box office alone, and over $8.5 billion worldwide making him the highest all-time box office star.

Hanks was born in Concord, California. His father, Amos Mefford Hanks (born in Glenn County, California, on March 9, 1924 – died in Alameda, California, on January 31, 1992), was an itinerant cook. His mother, Janet Marylyn (née Frager; born in Alameda County, California, on January 18, 1932), was a hospital worker. Hanks' mother is of Portuguese ancestry, while two of Hanks' paternal great-grandparents immigrated from Britain. Hanks' parents divorced in 1960. The family's three oldest children, Sandra (now Sandra Hanks Benoiton, a writer),[6] Larry (Lawrence M. Hanks, PhD, an entomology professor at the University of Illinois at Urbana-Champaign) and Tom, went with their father, while the youngest, Jim, now an actor and filmmaker, remained with his mother in Red Bluff, California.

In addition to having a family history of Catholicism and Mormonism, Hanks was a "Bible-toting evangelical teenager" for several years. In school, Hanks was unpopular with students and teachers alike, later telling Rolling Stone magazine: "I was a geek, a spaz. I was horribly, painfully, terribly shy. At the same time, I was the guy who'd yell out funny captions during filmstrips. But I didn't get into trouble. I was always a real good kid and pretty responsible." In 1965, Amos Hanks married Frances Wong, a San Francisco native of Chinese descent. Frances had three children, two of whom lived with Tom during his high school years. Hanks acted in school plays, including South Pacific, while attending Skyline High School in Oakland, California.

Hanks studied theater at Chabot College in Hayward, California, and after two years, transferred to California State University, Sacramento. Hanks told New York magazine in 1986: "Acting classes looked like the best place for a guy who liked to make a lot of noise and be rather flamboyant ...I spent a lot of time going to plays. I wouldn't take dates with me. I'd just drive to a theater, buy myself a ticket, sit in the seat and read the program, and then get into the play completely. I spent a lot of time like that, seeing Brecht, Tennessee Williams, Ibsen, and all that."

During his years studying theater, Hanks met Vincent Dowling, head of the Great Lakes Theater Festival in Cleveland, Ohio. At Dowling's suggestion, Hanks became an intern at the Festival. His internship stretched into a three-year experience that covered most aspects of theater production, including lighting, set design, and stage management, all of which caused Hanks to drop out of college. During the same time, Hanks won the Cleveland Critics Circle Award for Best Actor for his 1978 performance as Proteus in Shakespeare's The Two Gentlemen of Verona, one of the few times he played a villain.