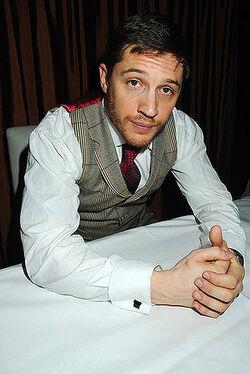 Edward Thomas "Tom" Hardy (born 15 September, 1977) is an English stage and screen actor and one of Hollywood's hottest actors. He is known for his roles in Black Hawk Down, Stuart: A Life Backwards, RocknRolla, Bronson, Inception, Warrior, Tinker Tailor Soldier Spy and This Means War and Mad Max: Fury Road. He also played Freddie Jackson in Martina Cole's The Take, based on her novel of the same name. He portrayed the primary villain Bane in the 2012 film The Dark Knight Rises, and starred as bootlegger Forrest Bondurant in the period gangster picture Lawless (2012).

Retrieved from "https://movies.fandom.com/wiki/Tom_Hardy?oldid=136425"
Community content is available under CC-BY-SA unless otherwise noted.