Start a Wiki
watch 01:27
The Loop (Movies)
Do you like this video?
Tom Jones 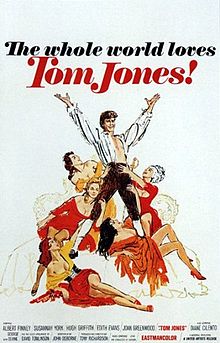 Tom Jones is a 1963 British adventure comedy film, an adaptation of Henry Fielding's classic novel The History of Tom Jones, a Foundling (1749), starring Albert Finney as the titular hero. It was one of the most critically acclaimed and popular comedies of its time, winning four Academy Awards.

The film was directed by Tony Richardson and the screenplay was adapted by playwright John Osborne. The film is notable for its unusual comic style: the opening sequence is performed in the style of a silent movie, and characters sometimes break the fourth wall, often by looking directly into the camera and addressing the audience, and going so far as to have the character of Tom Jones suddenly appearing to notice the camera and covering the lens with his hat.

Retrieved from "https://movies.fandom.com/wiki/Tom_Jones_(1963)?oldid=32032"
Community content is available under CC-BY-SA unless otherwise noted.