watch 00:59
The Loop (Movies)
Do you like this video?
Tommy Lee Jones 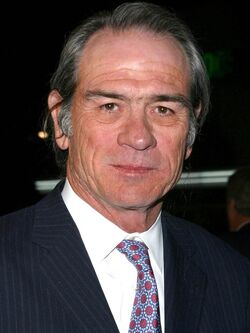 Tommy Lee Jones is an American actor and director. He is well known for his acting roles, many of which have been in dramas or action movies. He shot to stardom with his portrait of the hard-charging, tough-talking US Marshall in The Fugitive.

He is also known for playing Agent K in the Men in Black films. He is set to reprise this role for the upcoming Men in Black III, although it is set to be a smaller role as most of the film is set in 1969 with Josh Brolin as a young Agent K.

Retrieved from "https://movies.fandom.com/wiki/Tommy_Lee_Jones?oldid=71946"
Community content is available under CC-BY-SA unless otherwise noted.