for sequences of sci-fi action violence and peril, thematic elements, and language

$209 million
Tomorrowland is a 2015 American science fiction adventure film directed by Brad Bird, who co-wrote with the screenplay with Damon Lindelof. Based on the theme parks of the same name in Disneyland, the film's story was made by Bird, Lindelof, and Jeff Jensen. In this film, a disillusioned genius inventor and a teenage science enthusiast embark to an intriguing alternate dimension known as "Tomorrowland," where their actions directly affect their own world. The film stars George Clooney, Hugh Laurie, Britt Robertson, Raffey Cassidy, Tim McGraw, Kathryn Hahn, and Keegan-Michael Key. The film upon the working title known as 1952 before changing a title after found a theme park in Disneyland parks. The film was initially released on December 2014 date, same day as the christmas day, but pushed back to May 22, 2015 in theatres in the United States by Walt Disney Pictures, in IMAX and 3D conventional screening formats. The film received mixed reviews from film critics. The film grossed $209 million worldwide against its $190 million budget plus the marketing cost for $280 million, making it a box office bomb and was loss for Disney's projectors for $90-150 million nominal and $103-171 million adjusted in inflation, though the film's figures does not use for account revenue on home media, merchandising, and syndication.

In 1964, a young boy named Frank Walker attends the 1964 New York World's Fair to sell his prototype jet pack, but is rejected, as it does not work. Frank is approached by a young girl, Athena, who hands him an orange lapel pin with a blue "T" embossed on it, telling him to follow her onto Walt Disney's "It's a Small World" attraction at the Fair's Pepsi-Cola Pavilion. Frank obeys and sneaks onto the ride, where the pin is scanned by a laser, and he is transported to Tomorrowland, a futuristic cityscape, where advanced robots fix his jetpack, allowing him to fly and join the secretive world.

In the present day, optimistic teenager Casey Newton repeatedly sabotages the planned demolition of a NASA launch site in Florida. Her father, Eddie, is a NASA engineer, but faces losing his job. Casey is eventually caught and arrested. At the police station, she finds a pin in her belongings. While touching it, the pin transports her to Tomorrowland. Her adventure is cut short when the pin's battery runs out.

With help from her younger brother Nate, Casey finds a Houston memorabilia store related to the pin. The owners attack her when she is unable to divulge where she got the pin, insisting that Casey knows about a "little girl". Athena bursts in and defeats the owners, actually Audio-Animatronics, who self-destruct, blowing apart the shop. After Casey and Athena steal a car, Athena reveals she is an animatronic, purposed to find and recruit people who fit the ideals of Tomorrowland. Athena drops Casey off outside an adult Frank's house in Pittsfield, New York.

The reclusive, cynical Frank declines Casey's request to take her to Tomorrowland, having been banished from it years ago. Inside Frank's house, Casey finds a probability counter marking the end of the world. Frank warns her that the future is doomed, but she disagrees, thus lowering the counter's probability. Animatronic assassins arrive to kill Casey, but she and Frank escape, meeting Athena in the woods outside Frank's house. Frank resents Athena for lying to him about her true nature, but reluctantly agrees to help them get to Tomorrowland.

Using a teleportation device, the trio travel to the top of the Eiffel Tower. Frank explains that Gustave Eiffel, Jules Verne, Nikola Tesla, and Thomas Edison co-founded Plus Ultra, a secret society of futurists, creating Tomorrowland in another dimension, free to make scientific breakthroughs without obstruction. The trio use an antique rocket, called the Spectacle, hidden beneath the Eiffel Tower to travel to Tomorrowland.

There, they find Tomorrowland in a state of decay. David Nix, Tomorrowland's governor, greets them. They travel to a tachyon machine, invented by Frank, which accurately predicted the worldwide catastrophe. Casey refuses to accept the world will end, causing the future to temporarily alter. While Frank attempts to convince David to listen, he refuses and intends to have the group leave Tomorrowland.

Casey realizes the tachyon machine is telling humanity that the world will end, creating a self-fulfilling prophecy. They confront David, who admits he tried to prevent the future by projecting such images to humanity as a warning. Instead, they embraced the apocalypse, refusing to act to make a better future for their world. Believing that humanity simply gave up, David has also given up and intends to allow the apocalypse to happen. Casey, Frank, and Athena attempt to use a bomb to destroy the machine, leading to a fight with David. The bomb is accidentally thrown through a portal to an uninhabited island on Earth, the explosion pinning David's leg. Athena sees a vision of the future where Frank is shot by David, and she jumps in the way of his attack, mortally wounding herself. Making peace with Frank, Athena activates her self-destruct sequence, destroying the machine, which falls on David, killing him.

In the present, Casey and Frank lead Tomorrowland, recruit Eddie and Nate, and create a new group of recruitment animatronics like Athena, whom they were addressing at the beginning of the film. Given pins, the animatronic children set out to recruit new dreamers and thinkers for Tomorrowland. 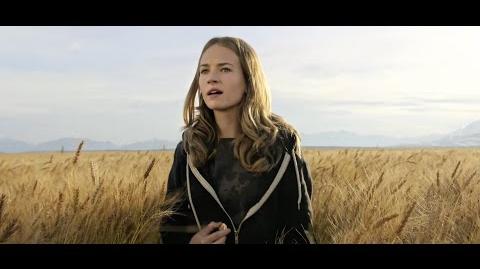 Disney's Tomorrowland Trailer -2 - In Theaters May 22!