Start a Wiki
watch 01:48
The Loop (Movies)
Do you like this video?
Toni Collette 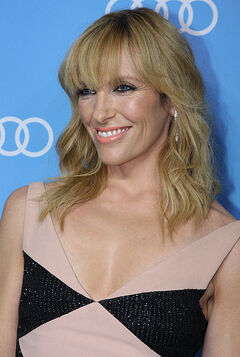 Collette was born in Blacktown, Sydney, New South Wales to Bob Collette, a truck driver, and Judy, a customer-service representative. She attended both the Australian Theatre for Young People and NIDA.

Collette has won four Australian Film Institute awards, including the Australian Best Actress in a Lead Role for Muriel's Wedding, in 1994, a role for which she gained 40 pounds (18 kg) in seven weeks. In 1996, she was part of the ensemble cast of the comedy, Cosi. She received an Academy Award nomination for her role as the mother of troubled boy Cole in the U.S. film The Sixth Sense, which also starred Bruce Willis and Haley Joel Osment.

She has also received broad acclaim on Broadway, starring as Queenie in Michael John LaChiusa's musical work, The Wild Party. For this demanding role, Collette received a Tony Award nomination for Best Performance by a Leading Actress in a Musical.

In 2006, she played the mother Sheryl in Little Miss Sunshine, for which she received a Golden Globe nomination for best actress.

In October 2006 a vocal album of her own songs titled Beautiful Awkward Pictures, recorded by Toni Collette & the Finish, was released on Hoola Hoop Records.

When Toni Collette was eleven years old she faked appendicitis out of boredom and longing for attention. She was so convincing that doctors removed her appendix, even though tests showed nothing wrong with it. [1]

Collette has been married to Dave Galafassi since 11 January 2003 and owns homes in both Australia and the Republic of Ireland.

Collette is a supporter of animal rights and PETA. She recently urged Australian Prime Minister John Howard to end the Australian practice of mulesing sheep, which is considered by many animal rights activists to be cruel.[2] She later revised her position after doing her own research of the Australian wool industry. [3]

Retrieved from "https://movies.fandom.com/wiki/Toni_Collette?oldid=151304"
Community content is available under CC-BY-SA unless otherwise noted.