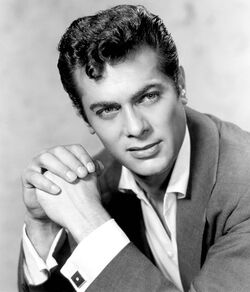 Tony Curtis was born Bernard Schwartz on June 3, 1925, at the Flower Fifth Avenue Hospital on 105th Street in Manhattan, New York City, the first of three boys born to Helen (née Klein) and Emanuel Schwartz.[1][2] Biographies have propagated a misconception that he was born in the Bronx, probably due to the family's moves when he was very young, but Tony pointedly corrected this in a TV interview.[3] His parents were Hungarian-Jewish emigrants from Czechoslovakia and Hungary: his father was born in Ópályi, near Mátészalka, and his mother was a native of Nagymihály (now Michalovce, Slovakia); she later said she arrived in the U.S. from Válykó (now Vaľkovo, Slovakia).[4][5] He spoke only Hungarian until the age of six, delaying his schooling.[6] His father was a tailor and the family lived in the back of the shop—his parents in one corner and Curtis and his brothers Julius and Robert in another. His mother made an appearance as a participant on the television show You Bet Your Life on February 9, 1956, hosted by Groucho Marx.[5] His mother was later diagnosed with schizophrenia. His youngest brother Robert was institutionalized with the same mental illness.

When Curtis was eight, he and his brother Julius were placed in an orphanage for a month because their parents could not afford to feed them. Four years later, Julius was struck and killed by a truck. Curtis joined a neighborhood gang whose main crimes were playing truant from school and minor pilfering at the local dime store. When Curtis was 11, a friendly neighbor saved him from what he felt would have led to a life of delinquency by sending him to a Boy Scout camp, where he was able to work off his energy and settle down. He attended Seward Park High School. At 16, he had his first small acting part in a school stage play.[7]

Curtis enlisted in the United States Navy after the attack on Pearl Harbor. Inspired by Cary Grant's role in Destination Tokyo and Tyrone Power's in Crash Dive (1943), he joined the Pacific submarine force.[6] Curtis served aboard a submarine tender, the USS Proteus, until the end of the Second World War. On September 2, 1945, Curtis witnessed the Japanese surrender in Tokyo Bay from his ship's signal bridge about a mile away.[8]

In 1948, Curtis arrived in Hollywood at age 23. In his autobiography, Curtis described how by chance he met Jack Warner on the plane to California, and also how he briefly dated Marilyn Monroe before either was famous.

Under contract at Universal Pictures, he changed his name from Bernard Schwartz to Anthony Curtis and met unknown actors Rock Hudson, James Best, Julie Adams and Piper Laurie.[9] The first name was from the novel Anthony Adverse and "Curtis" was from Kurtz, a surname in his mother's family.[10] Although Universal Pictures taught him fencing and riding, in keeping with the cinematic themes of the era, Curtis admitted he was at first interested only in girls and money and was not hopeful of his chances of becoming a major star. Curtis's biggest fear was having to return home to the Bronx as a failure:

Curtis's uncredited screen debut came in Criss Cross (1949) playing a rumba dancer, dancing with Yvonne de Carlo. The male star was Burt Lancaster who would make a number of films with Curtis.

He was in three Westerns, Sierra (1950), starring Audie Murphy, one of many names he worked with (including fellow Universal contractee, Rock Hudson), Winchester '73 (1950), starring James Stewart and Shelley Winters, and Kansas Raiders (1951), in which he supported Murphy again, playing Kit Dalton and billed as "Tony Curtis."

Curtis was receiving numerous fan letters, so Universal awarded him the starring role in The Prince Who Was a Thief (1951), a swashbuckler set in the Middle East with Piper Laurie. It was a hit at the box office and Curtis was now established.

He followed it up with Flesh and Fury (1952), a boxing movie; No Room for the Groom (1952), a comedy with Laurie directed by Douglas Sirk; and Son of Ali Baba (1952), another film set in the Arab world with Laurie.

Curtis then teamed up with then-wife Janet Leigh in Houdini (1953), in which Curtis played the title role. His next movies were more "B" fare: All American (1953), as a footballer; Forbidden (1953), as a criminal; Beachhead (1954), a war film; Johnny Dark (1954), with Laurie, as a racing car driver; and The Black Shield of Falworth (1954), a medieval swashbuckler with Leigh. The box office performances of these films were solid, and Curtis was growing in popularity.

Curtis graduated to more prestigious projects when he was cast in support of Burt Lancaster and Gina Lollobrigida in Trapeze (1956). It was one of the biggest hits of the year.

Curtis made a Western, The Rawhide Years (1957), was a gambler in Mister Cory (1957) and a cop in The Midnight Story (1957). Lancaster asked for him again, to play scheming press agent Sidney Falco in Sweet Smell of Success (1957), starring and co-produced by Lancaster. The film was a box office disappointment, but Curtis, for the first time in his career, received sensational reviews.

Another star-maker, Kirk Douglas, was eager to work with him in The Vikings (1958). Janet Leigh also starred, and the resulting movie was a box office hit. Curtis then co-starred with Frank Sinatra and Natalie Wood in Kings Go Forth (1958), a war story. It was mildly popular, but The Defiant Ones (1958), was a bigger success. Curtis gave an Oscar-nominated performance as a bigoted white escaped convict chained to a black man, Sidney Poitier.

Curtis and Janet Leigh then made a popular comedy for Blake Edwards at Universal, The Perfect Furlough (1958). He co-starred with Jack Lemmon and Marilyn Monroe in Billy Wilder's Some Like It Hot (1959). It was a huge success and became a classic; equally popular was Operation Petticoat (1959), a military comedy which Curtis made for Edwards alongside Cary Grant.

Curtis and Leigh made one more film together Who Was That Lady? (1960), a comedy with Dean Martin. He and Debbie Reynolds then starred in The Rat Race (1960).

Curtis then made two biopics: The Great Impostor (1961), directed by Robert Mulligan, playing Ferdinand Waldo Demara; and The Outsider (1961), in which he played war hero Ira Hayes. He returned to epics with Taras Bulba (1962), co starring Yul Brynner and Christine Kaufmann, who became Curtis' second wife.

He starred with Suzanne Pleshette in the comedy 40 Pounds of Trouble (1962), which was a mild hit.

Curtis was one of many stars who had small roles in The List of Adrian Messenger (1963). He supported Gregory Peck in Captain Newman, M.D. (1963) and had an uncredited dual role in Paris When It Sizzles (1964). He and Kaufman made their third movie together, the comedy Wild and Wonderful (1964). His focus remained on comedies: Goodbye Charlie (1964), with Debbie Reynolds; Sex and the Single Girl (1964), with Natalie Wood; The Great Race (1965), with Wood and Lemmon for Blake Edwards — the most expensive comedy film up till that time, but popular; Boeing Boeing (1965) a sex farce with Jerry Lewis; Not with My Wife, You Don't! (1966) with George C. Scott; Drop Dead Darling (1966), a British comedy; Don't Make Waves (1967), a satire of beach life from director Alexander Mackendrick, with Claudia Cardinale; and On My Way to the Crusades, I Met a Girl Who... (1967), an Italian comedy with Monica Vitti. In the early 1960s, he was a voice-over guest star on The Flintstones as "Stoney Curtis".

Because of the poor performance of a series of comedies, Curtis fired his agent and took a pay cut to $100,000 to play the title role in The Boston Strangler (1968), his first dramatic film in several years.[12] Response from the critics and public was excellent. He returned to comedy for Monte Carlo or Bust! (1969), an all-star car race film in the vein of The Great Race.

He made some comic adventure tales: You Can't Win 'Em All (1970) with Charles Bronson and Suppose They Gave a War and Nobody Came (1970).

Curtis decided it was time to turn to television and co-starred with Roger Moore in the TV series The Persuaders!.

Curtis supported Mae West in Sextette (1978) and starred in The Manitou (1978), a horror film, and The Bad News Bears Go to Japan (1978), a comedy. He had good roles in It Rained All Night the Day I Left (1980), Little Miss Marker (1980) and The Scarlett O'Hara War (1980) and was one of many stars in The Mirror Crack'd (1980). On television, he continued to make occasional guest appearances (sometimes playing fictional versions of himself) into the mid-2000s. His final TV series was as host of the documentary-retrospective series "Hollywood Babylon" (adapting Kenneth Anger's book series) in 1992–1993; each episode would include Curtis recalling some anecdotes from his own career.

Throughout his life, Curtis enjoyed painting and, beginning in the early 1980s, painted as a second career. His work commands more than $25,000 a canvas now. In the last years of his life, he concentrated on painting rather than movies. A surrealist, Curtis claimed Van Gogh, [Paul] Matisse, Picasso, and Magritte as influences.[6] "I still make movies but I'm not that interested in them any more. But I paint all the time." In 2007, his painting The Red Table was on display in the Metropolitan Museum of Art in New York City. His paintings can also be seen at the Tony Vanderploeg Gallery in Carmel, California.

Curtis spoke of his disappointment at never being awarded an Oscar. In March 2006, Curtis received the Sony Ericsson Empire Lifetime Achievement Award. He also has a star on the Hollywood Walk of Fame inducted in 1960, and received the Ordre des Arts et des Lettres from France in 1995.(citation needed)

For a number of years Curtis was voted by exhibitors in an annual poll from Quigley Publishing as among the top stars in the United States:

Retrieved from "https://movies.fandom.com/wiki/Tony_Curtis?oldid=309610"
Community content is available under CC-BY-SA unless otherwise noted.