During lunch with Benny, Top Cat spots a female cat walk by them. Excusing himself, Top Cat quickly runs after the female cat, interrupted by Griswald, but soon gets him out of the way and meets up with the female cat, who introduces herself as Trixie. While she finds him amusing, an alley cat isn't her type.

At the alley, Top Cat catches news of the Maharajah of Pookajee, known for his generosity and his rubies are just what Top Cat needs to impress Trixie. Top Cat and his gang head to the Connity Hall to meet the Maharajah, running into an obnoxious man named Strickland. The gang steal his tickets and get him sent away. While the gang distract Officer Dibble who is the Maharaja's escort, Top Cat makes a bet with the Maharaja and gets out of him a Maharaja Talk 5000 device with many functions, as the Maharaja hasn't any rubies.

The next morning, Officer Dibble is summoned to the police station to work for the Chief's son-in-law Strickland, who is taking over for the retired Chief. Strickland has replaced the staff with robots which he believes are more competent. Top Cat thwarts Strickland's attempt to evict him, preventing Strickland from getting the Mayor's funding for a robot police army. Strickland uses Trixie to keep Top Cat away from the alley while he carries his out his plan. Top Cat returns to the alley getting shunned by his gang, arrested by police and after an unfair trial, convicted to the Dog Jail on charge of stealing money from an orphanage.

With the arrest of Top Cat, Strickland is granted the Mayor's funding and establishes a robot police army and a major scale surveillance camera system which restricts privacy for the city. Meanwhile Top Cat tries to keep a low profile in dog jail but later becomes popular having turned the jail into a paradise for the convicts. As for Top Cat's gang they are struggling and begin to express their disbelief in him, which Top Cat notices from the one of the security cameras.

Strickland abuses his authority and starts coming up with ridiculous laws to take absurd amounts of money off people, intending to spend it on making himself even more 'handsome'. Tired of Strickland's tyranny, Trixie quits her job, Strickland fired her and turns to Officer Dibble and shows him evidence that a robot Top Cat sent by Strickland robbed the orphanage proving Top Cat's innocence. Dibble escapes to pass this to Top Cat's gang, but Trixie is captured by the police robots.

After Dibble tells the gang what really happened, they all head for Big Gus to help them break Top Cat out of prison, as he owes Top Cat. Big Gus leads them through an underground passage to the dog jail and leaves. The gang apologises for their doubts about Top Cat. With their cover blown by the dogs knowing they've got cats with them, the gang and Dibble escape through a sewer hole arriving at Strickland's HQ.

The gang infiltrate the building in robot guises finding Strickland his imprisoned everyone in the city and hoarded the city's cash. While Dibble distracts Strickland, the gang under the guise of robots make their way to Strickland's control centre, but Top Cat's gang are locked in Strickland's vault having tripped a silent alarm, Top Cat remaining outside. When Strickland arrives, he orders Top Cat to be annihilated by the robots. As a single robot enters, Top Cat realises the whole security system was manufactured by the Maharajah of Pookajee. Top Cat takes out the Maharajah Talk 5000 which presumably controls all robots to get Stickland. In panic, Strickland self-destructs the robot army except the single one, revealed to be Fancy-Fancy still in his robot guise. Everyone imprisoned and Top Cat's gang is released in the self-destruction process. Strickland is rendered helpless and Dibble arrests him and (on Top Cat's suggestion) sentences him to the Dog Jail.

Top Cat and Trixie renew their relationship, Officer Dibble is promoted as the new Chief of Police, the gang enjoy themselves, and finally Griswald asks for a place in Top Cat's gang, which Top Cat accepts.

This film was released theatrically in Mexico on September 16, 2011 in Digital 3D and regular 2D format. It was also released throughout South America. On January 23, 2012, Vertigo Films announced that the film would be released in the United Kingdom on June 1, 2012 (formerly August 20, 2012) in 2D, Digital 3D, and RealD 3D theaters.[7] A UK teaser trailer was released in April 5, 2012.[8] This has also marked as Vertigo's first ever animated feature film. In addition, Motion Pictures S.A. has released the film in Spain on June 22, 2012. A second UK trailer was released on May 14, 2012.[9] The movie had a very limited 2-day release in Australia and New Zealand in selected Hoyts theaters on June 10, 2012 and was later released on DVD on August 22, 2012, distributed by Lightning Entertainment and EagleAustralia.

Though the original Spanish version of the film was received favorably in Mexico and Latin America, the English dub of the film received extremely negative reviews from UK critics.[20][21][22][23][24]

Peter Bradshaw of The Guardian gave this film 1 out of 5 stars, saying "It's the bottom of the heap, and it frankly looks cheap, the disaster of the year is – Top Cat".

Derek Adams of Time Out London also gave this film 1 out of five stars, calling this film "a pity, then, that the key elements – storyline, dialogue, comedy value – are so woefully ineffectual. An air of boredom permeated the screening I attended and laughs were universally non-existent."

Colin Kennedy of Metro criticized this film, calling it "a dog's dinner of a film which will bore new viewers and disappoint old ones." and "post-Pixar kids will be bored rigid."

Michelle Moore of Close-Up Film gave this film a negative review for its animation, saying "When it comes to combining the two, scenes and characters, things at times get very disordered and appear out of place."

Rob of The Shiznit gave this 1 out of 5 stars and wrote, "It looks like Top Cat, sounds like Top Cat, but it doesn’t feel like Top Cat. It's as if a Mexican film company (Ánima Estudios) has taken an iconic American cartoon and slapped together a budget version... oh, wait, that’s exactly what’s happened."

Bethany Rutter of Little White Lies criticized this film saying that "it's heroically unfunny, the lame script is one of many sticking points. Awkward, clunky and predictable, it propels the film forward at a pace that manages to be both deathly slow and annoyingly jumpy."

Mike Sheridan of Entertainment.ie criticized this film and wrote, "In a world where studios are putting so much care into the development of characters in family aimed flicks, Top Cat just doesn’t cut it."

Geoffrey Macnab of The Independent gave this film 2 out of 5 stars and said that "neither the voice work (much of it done by Jason Harris) nor the animation is distinctive. Officer Dibble has only a marginal role. The use of 3D seems entirely tokenistic (an excuse to hike up ticket prices rather than an artistic decision.)"

Writing in the Daily Mail, Chris Tookey said the film, "one of the worst-ever spin-offs of a TV series", was "abysmally scripted, crudely drawn and cheaply made, with astonishing inattention to detail" and apparently "redubbed with little regard for synch by a team of justifiably unknown actors."

Shaun Munro of WhatCulture gave this film 1 and 1/2 out of 5 stars, calling it a "horrid, low budget take on the classic series" and wrote "Top Cat: The Movie is a rarity; an almost completely mirthless, charmless animated film."

On the positive side, Matthew Turner of ViewLondon enoyed this film, saying that " This movie provides a handful of decent laughs, though some of the jokes are a bit dodgy, the 3D effects are entirely superfluous and younger children might be a little bored."

Eddie Harrison of The List also gave this film a positive reaction, saying that "adults looking for undemanding fare for their kids may find Top Cat's brand of sass, irreverence and cheeky charm offer a persuasive alternative to today's crasser children's entertainments."

Variety reported that the film's producer, José Carlos García, is working on a sequel, with a possibility of this film having a limited theatrical release in the United States.[27]

Top Cat is a story of a gangwar between the Top Cat and his comrades with an honest cop. The movie is inspired from the series which was released in the era of the 60's. But unfortunately a lot has changed since then and Top Cat failed to make its mark.

The movie which is now available in 3D begins with Top Cat (Jason Harris) who is the leader of a mob of conmen or rather appropriately con cats (if ever such a term exists!). They hang out in the alleys of New York. They are up to no good and officer Dibble (Bill Lobely) who relentlessly finds ways and means to prevent these miscreants from causing harm. Top Cat (also known as 'TC') is somehow captured by another conman Strickland (voice given by Jason Harris) who has become the new officer of the police. Top Cat is forced to stay in the confines of the dog prison. Top Cat loyalists and gang members then embark on a mission to rescue their leader from the evil and sinister clutches of Strickland.

The entire movie was simply drifting from frame to frame without making any sense. The plot too seemed gibberish after a while and even the children were not impressed by this tangled mess of characters which were loosely assembled and thrown in to form the movie Top Cat which incidentally made you dose off after a while.[28] 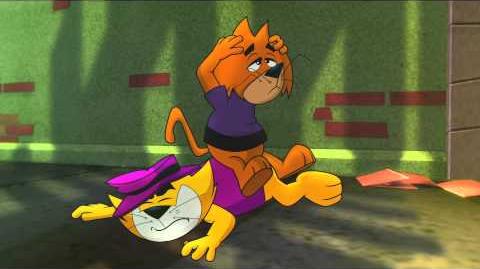 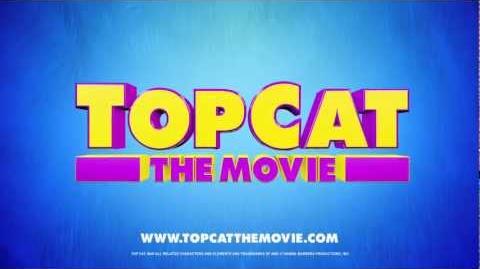 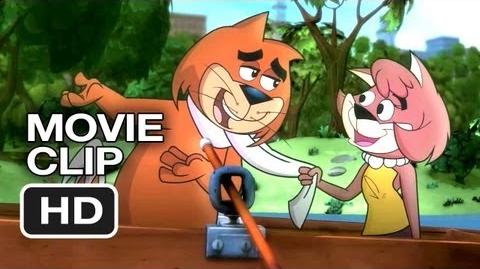 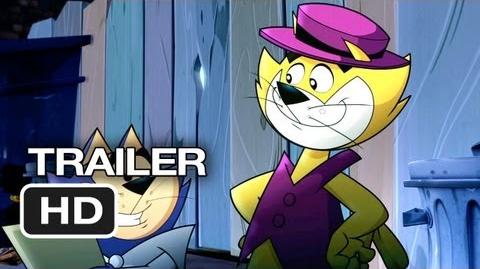