Toy Story (also know as Toy Story 1) is a 1995 American computer-animated family buddy comedy film produced by Pixar Animation Studios and directed by John Lasseter. Released by Walt Disney Pictures, Toy Story was the first feature-length computer-animated film and the first film produced by Pixar. Toy Story follows a group of anthropomorphic toys who pretend to be lifeless whenever humans are present, and focuses on the relationship between Woody, a pullstring cowboy doll (Tom Hanks), and Buzz Lightyear, an astronaut action figure (Tim Allen). The film was written by John Lasseter, Andrew Stanton, Joel Cohen, Alec Sokolow, and Joss Whedon, and featured music by Randy Newman. Its executive producer was Steve Jobs with Edwin Catmull.

Pixar, who had been producing short animated films to promote their computers, was approached by Disney to produce a computer-animated feature after the success of the short Tin Toy (1988), which is told from a small toy's perspective. Lasseter, Stanton, and Pete Docter wrote early story treatments which were thrown out by Disney, who pushed for a more edgy film. After disastrous story reels, production was halted and the script was re-written, better reflecting the tone and theme Pixar desired: that "toys deeply want children to play with them, and that this desire drives their hopes, fears, and actions." The studio, then consisting of a relatively small number of employees, produced the film under minor financial constraints.

The top-grossing film on its opening weekend, Toy Story went on to earn over $361 million worldwide. Reviews were entirely positive, praising both the animation's technical innovation and the screenplay's wit and sophistication, and it is now widely considered by many critics to be one of the best animated films ever made. In addition to home media releases and theatrical re-releases, Toy Story-inspired material has run the gamut from toys, video games, theme park attractions, spin-offs, merchandise, and two sequels—Toy Story 2 (1999) and Toy Story 3 (2010)—both of which received massive commercial success and critical acclaim. Toy Story was inducted into the National Film Registry as being "culturally, historically, or aesthetically significant" in 2005; its first year of eligibility.

Andy Davis is a six-year-old boy with a big imagination and his favorite toy is a cowboy doll named Sheriff Woody. In this world toys are living things that pretend to be lifeless when humans are present. Woody as self-proclaimed leader keeps toys organize, including Mr. Potato Head, Hamm the Piggy Bank, Rex the Dinosaur, Slinky Dog, and Woody's girlfriend Bo Peep the lamp shepherdess. In the following week, while Andy's family is preparing to move; however, the toys are caught-off guard when Andy's mom arranges his birthday to happen early today. Andy takes his baby sister Molly downstairs. Green Army Men deploy into a scouting mission for newcomers. The toys are relieved when the party appears to end with none of them having been replaced, but then Andy receives a surprise gift – a space action figure named Buzz Lightyear, who thinks he is an actual space ranger—and many of Woody's toy pals also fall for this fantasy.

Buzz impresses the other toys with his various features, and Andy becomes to favor him, making Woody feel left out. Woody tries to explain Buzz he is really just a toy, but Buzz believes otherwise. Andy is about to go on a family outing at Pizza Planet, his mom allows him to bring one toy. Fearing Andy will choose Buzz, Woody attempts to misplace Buzz behind a desk, but accidentally knocks him out a window instead, and the other toys rebel against Woody and Mr. Potato Head accusing him for ridding Buzz out of jealousy. Before they can exact punishment, Andy takes Woody instead and leaves for Pizza Planet. When the family stops for gas, Woody finds that Buzz has hitched a ride on the car, and both get into a big fight, only for Andy then leaves them behind. The two are now "lost toys." Woody saw a Pizza Planet delivery truck and stow away on it to the arcade restaurant, convincing Buzz (still thinking he is a real space ranger) to come with as to help him find a spaceship, knowing he can't show his face in Andy's room without Buzz. Just when Woody had found Andy, Buzz has them stuck in a crane game, where they are salvaged by Andy's mischievous neighbor, Sid Phillips.

After spending a creepy night together in Sid's room, Buzz saw a TV commercial advertising Buzz Lightyear toys. Buzz realized Woody had been right all along – he was just a toy. He sinks into despondency while Woody attempts to escape back to Andy's room but the toys were convinced that Woody had harmed Buzz. Sid wants to launch Buzz on a fire rocket, but his plans are delayed by a thunderstorm. Both toys began to work things out, as Woody teaches the purpose of being a toy and the joy Buzz can bring to Andy, restoring his confidence. The next day, Woody and Sid's mutant toy creations rescue Buzz just as Sid is about to launch the rocket and confront Sid into no longer abusing toys by coming to life in front of him, and he runs into his house screaming in horror. Woody and Buzz then leave Sid's house just as Andy and his family drive away toward their new home.

The two toys make it to the moving van, but Sid's dog Scud gives chase. Buzz gets left behind while saving Woody from Scud, and Woody tries rescuing him with Andy's RC car, but the other toys, thinking Woody eliminated RC as well, toss him off the truck. Having evaded Scud, Buzz and RC retrieve Woody, and continue after the truck. Seeing Woody and Buzz together on RC, the toys realize their mistake, and try to help them get aboard the van, but RC's batteries then go depleted, stranding them. Woody ignites the rocket on Buzz's back, only to throw RC into the truck before they soar into the air. Buzz opens his wings to free himself from the rocket before it explodes, gliding with Woody to land safely into a box in Andy's car, right next to Andy who missed his two favorite toys.

On Christmas Day, at their new house, they stage another reconnaissance mission to prepare for new toy arrivals. One of the toys tends to be "Mrs. Potato Head" to Mr. Potato Head's delight. As Woody jokingly asks what could be worse than Buzz, they hear Andy's new gift is a puppy, and both share a worried smile. 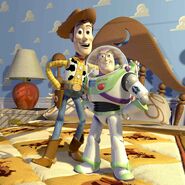 TOYSTORY09.png
Buzz and Woody
Add a photo to this gallery

Retrieved from "https://movies.fandom.com/wiki/Toy_Story?oldid=242921"
Community content is available under CC-BY-SA unless otherwise noted.