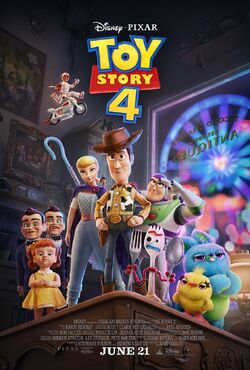 Toy Story 4 is a 2019 American 3D computer animated comedy film, the fourth installment in the Toy Story series, and the sequel to 2010's Toy Story 3. It is produced by Pixar Animation Studios, and will be released by Walt Disney Pictures. It is being directed by Josh Cooley, and executive-produced by John Lasseter, director of Toy Story (1995) and Toy Story 2 (1999). The story was conceived by the writing team on the original Toy Story: Lasseter, Pete Docter, Andrew Stanton and Lee Unkrich. The film is set to be released on June 21, 2019. Tom Hanks, Tim Allen, Annie Potts and Laurie Metcalf will reprise their respective roles as Sheriff Woody, Buzz Lightyear, Bo Peep and Andy's mother from the previous films, with Kristen Schaal reprising her role as Trixie from Toy Story 3. The rest of the cast members from the previous films will return to voice their characters.

The film was released in RealD 3D, Dolby Cinema, and IMAX 3D in the United States on June 21, 2019 by Walt Disney Studios Motion Pictures.

Nine years earlier, Bo Peep and Woody attempt to rescue RC from a rainstorm. Just as they finish the rescue, Woody watches as Bo is donated to a new owner because Molly has lost interest in her, and considers going with her, but Andy still needs Woody. Bo has made up her mind that this is the cycle of being a toy. In present day, while the toys are grateful to have Bonnie, Woody struggles to adapt to an environment where he is not the favorite as he was with Andy, apparent when Bonnie takes off Woody's sheriff badge and puts it on Jessie, not even bothering to give him a role during her playtime.

On the day of Bonnie's kindergarten orientation, Woody worries over her and sneaks into her backpack. After a classmate takes away Bonnie's arts and crafts supplies, Woody covertly recovers the materials and various pieces of garbage from the trash, including a plastic spork. Bonnie uses these to create a bipedal spork with googly eyes, whom she dubs "Forky." Forky comes to life in Bonnie's backpack and begins to experience an existential crisis, thinking he is garbage rather than a toy and wishing to remain in a trash can. As Forky becomes Bonnie's favorite toy, Woody takes it upon himself to prevent Forky from throwing himself away.

When Bonnie's family goes on a road trip, Forky jumps out of the RV window and Woody pursues him. After Woody explains how important he is to Bonnie, Forky decides to accompany Woody and return to her. Near a RV park where Bonnie's family is staying, Woody spots Bo Peep's lamp in an antique store window and goes in, hoping to see her. Inside, he and Forky encounter a talking doll named Gabby Gabby, who desires Woody's voice box to replace her broken one. While Woody is able to escape thanks to the store owner's granddaughter Harmony, Forky is left behind. At a playground, Woody is reunited with Bo and her sheep now living as "lost toys" that aren't dedicated to one child. Bo at first is hesitant go to the antique shop after having taken her years to escape the place previously, she agrees to help Woody save Forky and get back to Bonnie. At the antique shop, Gabby and Forky become acquainted; she hopes to have her voice box fix to get a chance with Harmony, her ideal owner.

Meanwhile, Buzz Lightyear searches for Woody but becomes lost at a fairground and ends up being strapped for a carnival game prize. He escapes with plush toys Ducky and Bunny, and they meet up with Woody and Bo. Jessie nails the RV's tire to stall for time till a repairman fixes it later. When meeting up with pocket toy cop Giggle McDimples, and her stuntman toy boyfriend Duke Caboom, they explain the situation though Duke is unwilling to help, since he had been discarded by his previous owner Rejean, for not ever making a successful jump on his motorbike. Bo confides Duke to be who he is, and agree to rescue Forky. The mission was under way, but Woody and the other toys got chased out by Gabby, her ventriloquist puppet henchmen, and the store owner's cat. In the aftermath, Bo and the other toys argue over whether to go back. Woody declares that rescuing Forky is his remaining purpose, and he indirectly insults Bo that being loyal is something a lost toy wouldn't understand. Alone, Woody encounters Gabby again, who expresses her longing for a child's love. Woody sympathizes with her plight, and willingly trades his voice box for Forky.

The toys part ways, but Woody watches as Harmony rejects Gabby. Woody comforts a heartbroken Gabby and invites her to become one of Bonnie's toys. Bo returns with the others to help and reconciles with Woody. They head for the carnival, while Forky fetches Buzz and Bonnie's toys; they interfere with the RV's controls, forcing Bonnie's dad to drive back to the carnival. Woody and Bo boost Duke to ride and jump across the Ferris wheel, fulfilling his dreams, to make way to the other side on a zip line in time. When Gabby sees a crying girl lost in the carnival, she decides instead to become that child's toy, emboldening the child to approach a security guard and be reunited with her parents.

At the carousel, Woody and Bo share a bittersweet goodbye. Woody is hesitant to leave Bo again. After Buzz tells Woody that Bonnie will be okay without him, Woody decides to stay with Bo instead of returning to Bonnie. Woody passes his sheriff badge over to Jessie and bids a heartfelt farewell to his friends. Woody and Bo begin a life together with Ducky, Bunny, Giggle, and Duke, dedicated to finding new owners for lost toys. And wherever he went, Woody would always have his friends by his side. Buzz and Woody recite the catchphrase "To Infinity and Beyond!" once more.

On her first day of first grade, Bonnie creates a second impromptu toy out of a plastic knife. It suffers the same existential crisis Forky once did, and is then smitten with her.

Retrieved from "https://movies.fandom.com/wiki/Toy_Story_4?oldid=243013"
Community content is available under CC-BY-SA unless otherwise noted.