watch 00:59
The Loop (Movies)
Do you like this video?
Trading Places 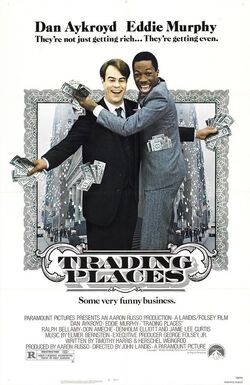 They're not just getting rich... they're getting even.
Directed By
John Landis
Produced By
Aaron Russo
Written By
Cast
Edited By
Malcolm Campbell
Cinematography
Robert Paynter
Music By
Elmer Bernstein
Studio
Distributed By
Paramount Pictures
Country

Trading Places (1983) is an American comedy written by Timothy Harris and Herschel Weingrod, directed by John Landis, and starring Dan Aykroyd and Eddie Murphy. It tells the story of an upper class commodities broker and a homeless street hustler whose lives cross paths when they are unknowingly made part of an elaborate bet.

A snobbish investor and a wily street con artist find their positions reversed as part of a bet by two callous millionaires.[1]

Retrieved from "https://movies.fandom.com/wiki/Trading_Places?oldid=117514"
Community content is available under CC-BY-SA unless otherwise noted.