watch 00:59
The Loop (Movies)
Do you like this video?
Trainspotting 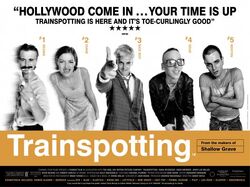 The film was released on February 23, 1996 by PolyGram Filmed Entertainment.

26-year-old Mark Renton is an unemployed, marginalized heroin addict living in the suburbs of Edinburgh, Scotland with his friends: Simon "Sick Boy" Williamson, a treacherous, womanizing James Bond fanatic; Daniel "Spud" Murphy, an outwardly docile confidence trickster; Francis "Franco" Begbie, an aggressive psychopath; and Thomas "Tommy" MacKenzie, an honest footballer. To afford their fix of heroin, the group (excluding Begbie, who prefers alcohol, and Tommy, who is clean) commits petty crimes. Renton attempts to wean himself off heroin with opium suppositories given by dealer Mikey Forrester. At a nightclub, Renton notices that his cessation of heroin use has increased his libido. He woos a girl named Diane Coulston and they have sex in the apartment owned by her parents, but is horrified to learn that she is below the age of consent. Diana uses this as a threat against Renton to continue their relationship.

Renton, Sick Boy and Spud relapse into heroin use, and are joined by Tommy, who has since become depressed having been dumped by his girlfriend, Elizabeth, due to the unknown earlier actions of Renton. Even the negligence-induced death of Dawn, the infant daughter of Allison – a fellow user – does not convince the group to recover. Renton and Spud are arrested for shoplifting, and Spud receives a six-month custodial sentence at HMP Saughton, while Renton escapes on probation due to entering a drug rehabilitation programme. Renton quickly relapses and nearly dies of an overdose at the home of his dealer, Swanney. Upon returning home after revival at a hospital, Renton's parents lock him in his childhood bedroom and force him to go cold turkey. Following a difficult withdrawal (punctuated with horrible hallucinations of his friends and Diane), Renton is released upon condition that he has an HIV/AIDS test. Despite years of sharing syringes with other addicts, Renton tests negative.

Renton is now clean, but bored and devoid of a sense of meaning in his life. He visits Tommy, who has become severely addicted and has tested HIV-positive. On Diane's advice, Renton moves to London and takes a job as a property letting agent. He begins to enjoy his new life of sobriety and corresponds with Diane, who keeps him up to date with developments back home. However, to Renton's exasperation, Begbie tracks him down and takes up refuge with him as Begbie is wanted for armed robbery of a jewellery shop back home. They are soon joined by Sick Boy, now a pimp and drug dealer. The three return to Edinburgh for the funeral of Tommy, who has died of toxoplasmosis, and because Begbie has assaulted two of Renton's potential clients.

Sick Boy offers Renton, Spud (who has recently been released from prison) and Begbie the chance to help him buy two kilograms of heroin for £4,000 from Mikey Forrester, and resell it at a higher price. Renton reluctantly covers the remaining £2,000 of the cost, and the group returns to London to sell the heroin to a major dealer for £16,000. As they celebrate, Renton secretly suggests to Spud that they could both leave with the money, but Spud, motivated by fear of Begbie and loyalty, refuses. However, Sick Boy says he would happily do so, and Begbie violently attacks a man who causes him to spill beer down himself. That night, Renton quietly steals the bag of money and leaves. Spud witnesses him, but does not warn the others. Renton leaves £4,000 in a safe deposit box for Spud, who "never hurt anybody", and walks toward his future. Begbie, seeing Renton and the money are gone, angrily destroys the hotel room where the four stay, prompting the police to arrive and arrest him, while Sick Boy and Spud flee, with the latter claiming his share of the money.

Retrieved from "https://movies.fandom.com/wiki/Trainspotting?oldid=179324"
Community content is available under CC-BY-SA unless otherwise noted.