Start a Wiki
watch 16:45
The Loop (Movies)
Do you like this video?
Transformers: Revenge of the Fallen 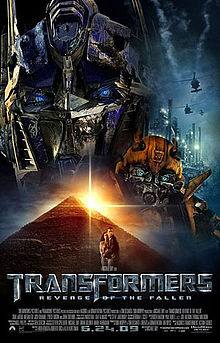 Transformers: Revenge of the Fallen is a 2009 American science fiction action film directed by Michael Bay and executive produced by Steven Spielberg. It is a sequel to 2007's Transformers and the second installment in the live-action Transformers series. The plot revolves around Sam Witwicky (Shia LaBeouf), who is caught in the war between two factions of alien robots, the Autobots and the Decepticons. Sam is having hallucinatory episodes of Cybertronian symbols, and is being hunted by the Decepticons under the orders of an ancient Decepticon named The Fallen, who seeks to get revenge on Earth by finding and activating a machine that would provide the Decepticons with an energon source, destroying the Sun and all life on Earth in the process.

With deadlines jeopardized by possible strikes by the Directors Guild of America and the Screen Actors Guild, Bay managed to finish the production on time with the help of previsualization and a scriptment by his writers Roberto Orci, Alex Kurtzman, and series newcomer Ehren Kruger. Shooting took place from May to November 2008, with locations in Egypt, Jordan, Pennsylvania, New Jersey, and California, as well as air bases in New Mexico and Arizona.

Revenge of the Fallen was released on June 24, 2009, and was a huge box office success, setting records upon release. The film grossed a total of $402 million in North America and $836 million worldwide. It was the second most successful film of 2009 (behind Avatar), 17th domestically, the 34th highest-grossing film of all time and fourth highest of the year (behind Avatar, Harry Potter and the Half-Blood Prince, and Ice Age: Dawn of the Dinosaurs) internationally.

The film received mostly negative reviews by critics and by audiences, mostly because of the frequent stereotypes on the movie directing; it won three awards and became the highest-grossing film to win Worst Picture at the 30th Golden Raspberry Awards ceremony. A third film, Transformers: Dark of the Moon, was released on June 29, 2011. It was also DreamWorks's last film when Paramount Pictures owned the studio from 2006-2008 as their partnerships ended.

In the distant past, before 17,000 B.C., a race of ancient Transformers led by the 7 Primes, harvested stars to store as Energon. They used sun-absorbing machines called Sun Harvesters. The Primes agreed not to absorb any star that has life on one of its planets. One Prime, attacked Earth around 17,000 B.C., and after defeating ancient humans, built a Harvester on Earth. The rest of the Primes Dynasty name him The Fallen. Some fought to the death, to prevent its activation by hiding the "Matrix of Leadership", which is the key to start the Harvester.

In the present, two years after defeating Megatron, the Autobots have joined the U.S. military to create the Nonbiological Extraterrestrial Species Treaty (NEST), an elite, classified military task force working with the Autobots hunting down Decepticon resistance, with Major William Lennox (Josh Duhamel) and his squad as the human part of the NEST. During a mission in Shanghai, Optimus Prime learns of The Fallen's return, but is unfamiliar with the name. They chase remaining Decepticons through the Shanghai streets, puncturing a bridge. National Security Advisor Theodore Galloway (John Benjamin Hickey) chastises the task force for their destructive tactics and reminds them of the location of Megatron's corpse in the Laurentian Abyss and the surviving Allspark shard retrieved by Optimus. Soundwave, the Decepticons' communications officer, eavesdrops on the conversation and sends Ravage to retrieve the shard from NEST's base.

Meanwhile, Sam Witwicky (Shia LaBeouf) prepares to attend college, leaving his girlfriend Mikaela Banes (Megan Fox) and guardian Bumblebee behind. Packing his things, he discovers another Allspark shard in his old T-shirt he wore on the day when he destroyed Megatron. The shard channels its knowledge into his mind, causing him to see Cybertronian symbols. He gives the shard to Mikaela, and when the Decepticon Wheelie tries to steal it, Mikaela locks him in a toolbox. At college, Sam meets his roommate, Leo Spitz (Ramón Rodríguez), who runs a conspiracy website regarding the Transformers. Sam's hallucinations get worse, attracting the attention of fellow student Alice (Isabel Lucas), who is really a shapeshifting Pretender Decepticon. Ravage, Scalpel, and the Constructicons resurrect Megatron using the retrieved shard, who reunites with The Fallen, the founder of the Decepticons. The Fallen orders Megatron to capture Sam and kill Optimus, who is the last surviving descendant of the Primes and the only transformer who can kill him.

Sam, Mikaela, and Leo are targeted by the Decepticons. They kill Alice, but are captured by Megatron, Starscream, and Grindor. Optimus and Bumblebee attempt to rescue them. Optimus kills Grindor but in the ensuing fight, Optimus is killed by Megatron. The Fallen uses Earth's telecommunications to ask for Sam in return for mankind's survival, making Sam an international fugitive. Sam, Mikaela, Leo, Bumblebee, and twins Skids and Mudflap enlist the help of ex-Sector 7 Agent Seymore Simmons (John Turturro). Simmons reveals that the Transformers visited Earth eons ago and the most ancient, known as Seekers, live in secret. With help from Wheelie, they track down the elderly Decepticon Jetfire, who defected to the Autobots years ago, tired of fighting. Jetfire teleports the group to Egypt and explains The Fallen's history before sending them off to find the Tomb of the Primes to revive Optimus. Simmons contacts NEST, telling them to bring Optimus and the other Autobots to Egypt.

Sam's group finds the tomb hidden in Petra, but the Matrix crumbles to dust in Sam's hands. Undeterred, Sam places the Matrix's remains in his sock. NEST and the Autobots land, but are cut off from the Pentagon thanks to Starscream. The Decepticons attack, including Constructicon Devastator who demolishes one of the Pyramids of Giza, unearthing the Sun Harvester, which was hidden inside the pyramid. He is then killed by a railgun attack summoned by Simmons. Sam's parents, who were kidnapped by the Decepticons, are used as bargaining chips with Sam to try to obtain the Matrix, but the trap fails when Bumblebee rescues them, killing Ravage in the process. Chief Master Sergeant Robert Epps (Tyrese Gibson) summons an airstrike which kills most of the Decepticons; however Megatron manages to shoot and kill Sam. Sam then has a vision, in which he meets the Primes, who tell him the Matrix is not found but earned, and that he has earned the right to bear it. They then resurrect Sam, who uses the Matrix to revive Optimus. The Fallen appears and uses the Matrix to start the Sun Harvester. Jetfire relinquishes his parts to Optimus, allowing the latter to gain new powers, including flight. Optimus destroys the Sun Harvester, cripples Megatron, and kills The Fallen. Megatron escapes with Starscream, and the Autobots and their allies return to the United States.

The movie recieved very negative reviews from both critics and fans of the first film. The film has a score of 20% on Rotten Tomatoes based on 250 reviews with an average score of 3.91/10. Michael Bay even admitted he hated the film.

Retrieved from "https://movies.fandom.com/wiki/Transformers:_Revenge_of_the_Fallen?oldid=253269"
Community content is available under CC-BY-SA unless otherwise noted.