Moviepedia
Register
Don't have an account?
Sign In
Advertisement
in: Transformers films, Films directed by Michael Bay, 2017 films,
and 11 more

After the events of Transformers: Age of Extinction Optimus Prime ventures into space to look for the creators who evented him. Cade Yeager and his family now under protection from the autobots on Earth.

In the first millennium, King Arthur leads his 12 knights and his soldiers into a battle against the Saxons. However, the Saxons overpower them, giving the Saxons the upper edge. Having realized this, he enlists the help of the magician Merlin, who negotiates with a Cybertronian Knight. The Knight gives Merlin a staff wielding ultimate power, and transforms along with his other 11 Knights into a large dragon transformer named Dragonstorm. Dragonstorm comes to the knights' aid, wiping out their adversaries, and winning the battle in King Arthur's favor.

In the present day, Optimus Prime has left Earth in search of his creators. All Transformers, regardless of faction, remain outcasts on Earth. However, more Transformers have been arriving on the planet recently in the years since Prime left. The Transformers Reaction Force dedicates itself to hunting down and destroying Transformers of all factions. In the half of the war-torn area of Chicago, a group of kids stumble upon a crashed alien ship with a Cybertronian Knight inside. The kids are confronted by a TRF Walker, which is destroyed by Izabella, a survivor of the Battle of Chicago. Izabella and her Transformer companions, Sqweeks and Canopy, urge the kids to escape, but Canopy is shot by a TRF drone and dies. Shortly after, Bumblebee and Cade Yeager arrive and help the kids escape. Yeager finds the dying Knight, who gives him a metallic talisman. The TRF attempt to capture Cade, but the arrival of Hound (Movie), and Bumblebee's threat to Captain Santos prevent them. However, a sniper attaches a tracking beacon to Bee.

Meanwhile, Optimus Prime crash-lands on his home planet Cybertron. Finding that Cybertron is dead, Optimus confronts his creator, a powerful sorceress named Quintessa. She restrains him, and relives him of his Sword and Shield. Quintessa corrupts Prime, promising him a chance to save Cybertron, making Optimus believe that he was the reason why it was destroyed in the first place. Quintessa explains that Earth is actually a Transformer itself, named Unicron. She reveals that Unicron is Cybertron's enemy, and that she must use a hidden artifact on Earth in order to gain the energy to fix Cybertron. The artifact is Merlin's staff, and it was stolen from her by the 12 Knights of Iacon. The knights hid the artifact on Earth, and gave it to Merlin. She then dubs him "Nemesis Prime".

Lennox, a former N.E.S.T. member who now works under the TRF, speaks with General Morshower, his former superior, about the presence of an ancient alien technology on Earth. This technology can help bring Cybertron into Earth's atmosphere, but only through the use of the staff given to Merlin. The TRF makes a deal with Megatron, who demands the release of his fellow Decepticons - Onslaught, Mohawk, Nitro, Dreadbot, and Berserker. The TRF teams up with Megatron's gang, with the TRF hoping to arrest Cade Yeager, and Megatron needing Cade's artifact given to him by the knight, Steelbane.

Yeager hides out at a junkyard, which serves as a sanctuary for many of the surviving Autobots - Bumblebee, Hound, Drift, Crosshairs, Grimlock, Wheelie, and many others. While there, Yeager finds that Izabella has followed him back; Yeager tells her to leave but Izabella wants to stay and fight. The next morning, Megatron's Decepticons arrive at the junkyard and Megatron briefly engages Hound. Meanwhile, The Autobots, Cade, Izabella, and Jimmy arrive in an abandoned city. Drift and Crosshairs kill Onslaught, while Bumblebee kills Mohawk. The TRF arrives, and shoots Cade in the chest. However, the artifact saves Cade. Yeager is confronted by a Transformer named Cogman, convincing him to go to England with him and Bee to find out about the artifact.

Meanwhile, an Oxford professor named Viviane Wembley is kidnapped by the Autobot Hot Rod. Both are brought to England and meet with Sir Edmund Burton, the last living member of the Witwiccan Order. Burton tells Cade and Viviane of the Transformers' origins, saying that the collision of Cybertron with Earth would spell certain doom. He tasks Viviane, the last descendant of Merlin, with obtaining his staff so they can prevent the impending apocalypse. Burton tells Yeager that, as a person defined by honor and dignity, he is the last knight. The talisman given to Yeager has wrapped around his arm by this point. The trio are forced to evacuate Burton's home when the TRF arrives.

With Yeager's help, Viviane delves into her father's past, and finds that they must take the HMS Alliance into the sea to find the staff inside the Knights' sunken ship. Bumblebee, Yeager, and Viviane go to the Alliance with Cogman and Burton, who neglects to go on the journey any further. The Alliance heads for the machine, but is intercepted by a TRF submarine. The Alliance ventures inside the machine, where Viviane and Yeager find a chamber of Cybertronian Knights, as well as Merlin's staff. One Knight, Skullitron, awakens and attacks them. The TRF intervenes and attacks Skullitron, while Viviane activates the staff and the ship begins to rise towards the ocean's surface. As more Knights rise up to fight, Nemesis Prime intervenes, and takes the staff from Viviane with the intention of restoring his homeworld.

Bumblebee confronts and fights Optimus on top of the ship, as Yeager and Lennox struggle to step in. As Optimus is about to kill Bumblebee, Bee speaks, urging Prime to remember who he is. Optimus breaks free of Quintessa's control, but Megatron flies in and seizes the staff from Optimus, revealing that Quintessa also hired Megatron with finding the staff, knowing that Prime would be too "weak". As Megatron escapes, The Cybertronian Knights then attack Optimus for his betrayal. Before his execution, Yeager's talisman becomes the Excalibur sword, and he stops the fight. The Knights yield to Yeager, who urges Optimus to protect the Earth once more.

At Stonehenge, Megatron delivers the staff to Quintessa, who uses it to gain energy from Unicron/Earth, as Cybertron slowly begins to pull itself together. As the military intervenes, Megatron shoots Burton, who dies by Cogman's side. Optimus unites the Knights, the Autobots and the TRF soldiers. Using Lockdown's ship, they set off to Cybertron in order to stop it's collision with Earth. Optimus Prime kills the Infernocons, as the humans prepare to escape the battle. Viviane stays to retrieve the staff, and Cade follows. Optimus boards the ship, and aids the Autobots in fighting Megatron. Prime defeats Megatron, and Bumblebee destroys Quintessa. Viviane removes the staff, saving Earth.

The Autobots reunite after the battle, and Optimus declares that his faith in humanity is restored and they had to work together and rebuild their worlds to survive. The Autobots use Lockdown's ship to return to Cybertron promising to return if they were needed.

Later, a group of scientists inspect a part of Unicron the being laying dormant with in the planet twitches as his optic begun glowing. 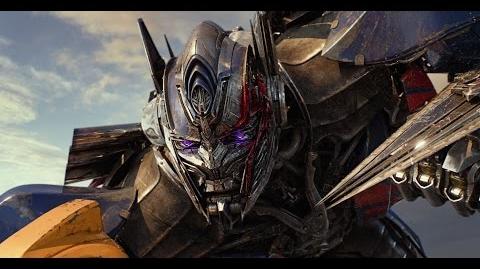 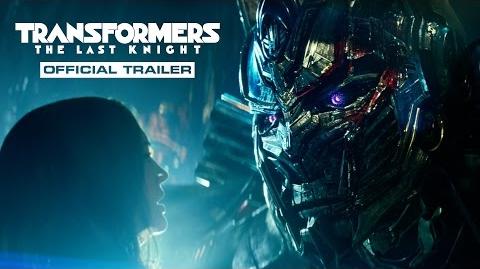 Transformers: The Last Knight at the Internet Movie Database