Start a Wiki
watch 01:27
The Loop (Movies)
Do you like this video?
Travis Tope 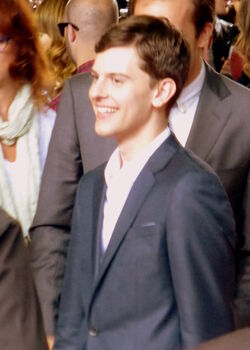 Tope is a Texas native, born November 11, 1991. He was living in Plano before he started auditioning for acting. In January 2010, as a member of Plano's Boy Scout Troop 1000, Tope was awarded the rank of Eagle Scout.

In 2014, Tope starred as JT Doyle in the drama Little Accidents opposite Elizabeth Banks and Boyd Holbrook, with Sara Colangelo directing. It premiered at the Sundance Film Festival on January 22, 2014, and was released on January 16, 2015, by Amplify. Then Tope played the role Chris Truby in the drama Men, Women & Children along with Adam Sandler and Rosemarie DeWitt, and directed by Jason Reitman. The film had premiered on September 6, 2014 at TIFF and was released domestically on October 1, 2014 by Paramount Pictures. Then he played the lead role of Nick Strain in the slasher horror film The Town That Dreaded Sundown along with Addison Timlin, which was directed by Alfonso Gomez-Rejon. The film was released by Orion Pictures on October 16, 2014. He then played Joe Harper in the final fifth season of the HBO series Boardwalk Empire.

In October 2014, at the Live Reading of the script of the 1999 film American Beauty, Tope read the role of Ricky Fitts, originally played by Wes Bentley.

In 2015, Tope starred in the premiere episode "The Battle Creek Way" of the CBS comedy series Battle Creek as Ricky. Later he appeared as Wyatt Maslow in the episode "Blaze of Glory" in the sixth season of another CBS series, NCIS: Los Angeles.

Tope has played the role of male lead Evan Klein in the Blumhouse science-fiction horror film Viral opposite Analeigh Tipton and Sofia Black D'Elia, which Henry Joost and Ariel Schulman directed. The film was scheduled to be released on February 19, 2016 by Dimension Films.

Tope played Charlie Miller in the science-fiction disaster film Independence Day: Resurgence, along with Liam Hemsworth and Jessie Usher, directed by Roland Emmerich. The film was released on June 24, 2016 by 20th Century Fox.

Retrieved from "https://movies.fandom.com/wiki/Travis_Tope?oldid=155483"
Community content is available under CC-BY-SA unless otherwise noted.