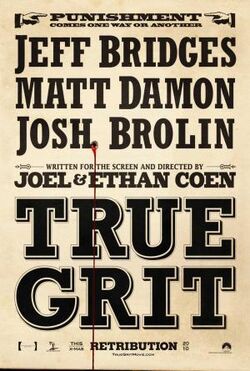 True Grit is the second film adaptation of a 1968 novel by Charles Portis of the same name. It is directed by Joel and Ethan Coen with a release date of December 25, 2010.

Mattie Ross, a 14-year-old girl, undertakes a quest to avenge her father's death at the hands of a drifter named Tom Chaney. Ross persuades an alcoholic marshal named Rooster Cogburn to join her in tracking down Chaney.

Retrieved from "https://movies.fandom.com/wiki/True_Grit_(2010)?oldid=150873"
Community content is available under CC-BY-SA unless otherwise noted.