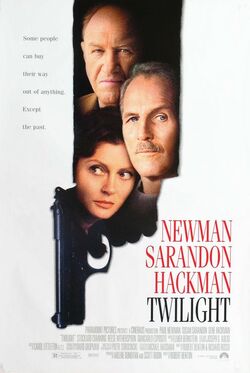 The film was released in the United States on March 6, 1998 by Paramount Pictures.

Aging private detective Harry Ross (Newman), an ex-cop, is working on a case to return 17-year-old runaway Mel Ames (Witherspoon) to her parents' home. He tracks down Mel and her sleazy boyfriend, Jeff Willis (Schreiber), at a Mexican resort. During a struggle, Mel accidentally shoots Harry with his pistol, striking him in the upper thigh.

The plot picks up two years later, when Ross is living in Southern California in the guest quarters of Mel's wealthy parents, Jack (Hackman) and Catherine Ames (Sarandon). They are former movie stars, now in the twilight of their careers. Jack is dying of cancer, which is out of remission, and he and Ross pass time playing cards.

One day, Jack asks a favor of Harry: to deliver a package to an address in Los Angeles. It turns out to be the first development in a series of twists and turns in a 20-year-old case involving the disappearance of Catherine's ex-husband.

When Harry arrives at the address, he encounters a man named Ivar, who has just been fatally shot and shoots at Harry. Harry is detained by police, including former colleague Lt. Verna Hollander (Channing). At the police station, he runs into another (now retired) old pal and colleague, Raymond Hope (Garner).

Verna and Raymond are both sympathetic, as they had heard rumors that Harry suffered damage to his genitals when shot in Mexico. Harry explains that he was only shot in the thigh.

Harry likes Catherine, who flirts with him from time to time. He acts as an agent for Jack and Catherine, who are being blackmailed by Jeff, now out of prison, and his parole officer Gloria Lamar (Martindale).

Harry and Catherine have sex for the first (and only) time. Jack angrily realizes this when he has a heart attack that same night, and Catherine responds to his call for help wearing Harry's shirt.

Harry, meanwhile, is forced to acknowledge that his friends have deceived and manipulated him.

Raymond tries to persuade Harry to get away from it all, but Harry has figured out that Raymond was a conspirator in the murder of Catherine's first husband 20 years before. Raymond shoots at Harry, but Harry kills him first. Following this shooting, Harry reconciles with Catherine and Jack. He leaves town with Verna.