Start a Wiki
watch 01:48
The Loop (Movies)
Do you like this video?
Tyler Perry's Temptation: Confessions of a Marriage Counselor 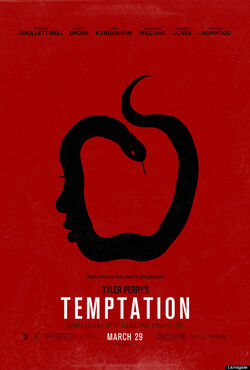 Temptation: Confessions of a Marriage Counselor is an upcoming drama film directed by, written by, and produced by Tyler Perry. The film is adapted from the play of the same name written by Perry, with several changes. This will be the thirteenth film by Perry and is scheduled to be released on March 29, 2013.

A married marriage counsellor falls in love with one of her patients, who is a womanising social media mogul, after feeling neglected by her current husband. Her husband finds out and she begins to be abused by the man she falls in love with.

According to initial reports about the film's cast, actor Jerry Stiller was supposed to have a unspecified role in the film, but it was later proven to be false.

While filming a scene between Judith and Brice, Lance Gross slammed the door of the truck so hard, the window shattered.

"Temptation: Confessions of a Marriage Counselor" wasn't screened for critics and was given negative reviews.

Rotten Tomatoes gives a score of 15% based on 33 reviews.

At Metacritic, which assigns a weighted average rating out of 100 to reviews from mainstream critics, the film has received an average score of 27%, indicating "generally unfavorable reviews".

Many viewers pointed to the fact that the main character was "punished" with HIV for cheating on her husband, further miseducating and stigmatizing the disease.

Marjorie Baumgarten from the Austin Chronicle said, "Apart from its dramatic predictability, Temptation is a snooze because of its languid pacing and rudimentary camerawork."

Roger Ebert called it "flat-out ludicrous from beginning to end."

Entertainment Weekly wrote: "A few wild, third-act twists give Perry's middling melodrama some soap-opera kick. But all the finger-wagging sure does get tiring after a while."

The Hollywood Reporter wrote: "Onscreen, it somehow manages to be at once wildly overblown and terminally boring."

Retrieved from "https://movies.fandom.com/wiki/Tyler_Perry%27s_Temptation:_Confessions_of_a_Marriage_Counselor?oldid=119436"
Community content is available under CC-BY-SA unless otherwise noted.