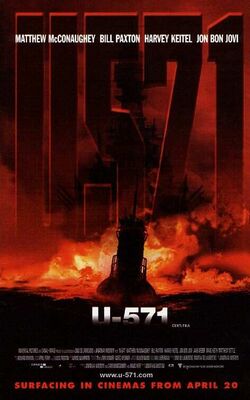 U-571 is a 2000 film directed by Jonathan Mostow who also wrote it. The film stars Matthew McConaughey, Bill Paxton, Harvey Keitel and Jon Bon Jovi.

Crew of the S-33 boat have their R&R cut short to go on a special op disguised as a German U-Boat to capture an enigma machine on board a disabled U-boat. The mission goes to plan until the S-33 is hit by a torpedo. The remaining sailors must board the German U-boat in any hope to survive.

Retrieved from "https://movies.fandom.com/wiki/U-571?oldid=119743"
Community content is available under CC-BY-SA unless otherwise noted.