watch 00:59
The Loop (Movies)
Do you like this video?
Unbreakable 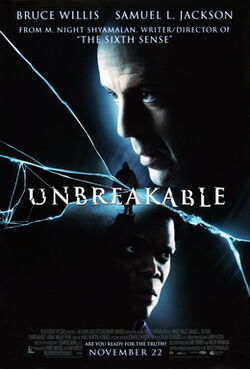 Unbreakable is a 2000 American superhero thriller film written, produced, and directed by M. Night Shyamalan. The film stars Bruce Willis and Samuel L. Jackson. Unbreakable tells the story of Philadelphia security guard, David Dunn, who slowly discovers that he is a superhero. The film explores analogies between the real world and the mythology of superheroes. It is the first part of the Eastrail 177 Trilogy.

Unbreakable is a riveting story shared by two men. David Dunn, a man from a blue-collar neighborhood in Philadelphia emerges unharmed as the sole survivor of a devastating train accident. Enter Elijah Price, a mysterious stranger who offers a bizarre explanation as to why David escaped without a single scratch, an explanation that threatens to change David's family and life forever.

Unbreakable received generally positive reviews from critics. On Rotten Tomatoes, The film has a score of 70% based on 169 reviews with an average score of 6.34/10.

After the film's release, rumors of possible sequels began circulating in different interviews and in film fansites. In 2000, Bruce Willis was quoted as hoping for an Unbreakable trilogy.[35] In December 2000, Shyamalan denied rumors he wrote Unbreakable as the first installment of a trilogy, saying he was not even thinking about it.[35] In August 2001, Shyamalan stated that, because of successful DVD sales, he had approached Touchstone Pictures about an Unbreakable sequel, an idea Shyamalan said the studio originally turned down because of the film's poor box office performance.[36] In a September 2008 article, Shyamalan and Samuel L. Jackson said there was some discussion of a sequel when the film was being made, but that it mostly died with the poor box office. Jackson said he was still interested in a sequel but Shyamalan was non-committal.[37] In February 2010, Willis said that Shyamalan was "still thinking about doing the fight movie between me and Sam that we were going to do", and stated that as long as Jackson was able to participate he would be "up for it".[38]

In September 2010, Shyamalan revealed that the second planned villain from the first film was moved to the planned sequel, but that character has now been used for an upcoming film that he will write and produce.

Shyamalan's horror thriller film Split has been described as a thematic sequel to Unbreakable,[39] and was released on January 20, 2017. It is revealed that Split actually takes place in the same fictional storyline, with Bruce Willis's character appearing in a final reveal, directly referencing Mr. Glass when discussing the film's villain, "The Horde".

Shyamalan expressed hope for a third installment following Split, saying, "I hope [a third Unbreakable film happens]. The answer is yes. I'm just such a wimp sometimes. I don't know what's going to happen when I go off in my room, a week after this film opens, to write the script. But I'm going to start writing. [I have] a really robust outline, which is pretty intricate. But now the standards for my outlines are higher. I need to know I've won already. I'm almost there but I'm not quite there."[40] In April 2017, Shyamalan announced the official title, release date, and returning actors for the third movie. The film, titled Glass, will be released January 18, 2019, and will feature Bruce Willis, Samuel L. Jackson, Ana-Taylor Joy, James McAvoy, returning to their respective roles in the series.[5]

Retrieved from "https://movies.fandom.com/wiki/Unbreakable?oldid=215253"
Community content is available under CC-BY-SA unless otherwise noted.