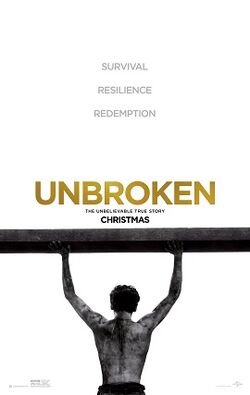 Unbroken is a 2014 American war drama produced and directed by Angelina Jolie. It is based on the 2010 non-fiction book by Laura Hillenbrand (Unbroken: A World War II Story of Survival, Resilience, and Redemption), and revolves around the life of USA Olympian and athlete Louis "Louie" Zamperini (portrayed by Jack O'Connell), who survived in a raft for 47 days after his bomber was downed in WWII, only to be captured and sent to a series of P.O.W. camps.

After a near-fatal plane crash in WWII, Olympian Louis Zamperini spends a harrowing 47 days in a raft with two fellow crewmen before he's caught by the Japanese navy and sent to a prisoner-of-war camp.[1]

Retrieved from "https://movies.fandom.com/wiki/Unbroken?oldid=119742"
Community content is available under CC-BY-SA unless otherwise noted.