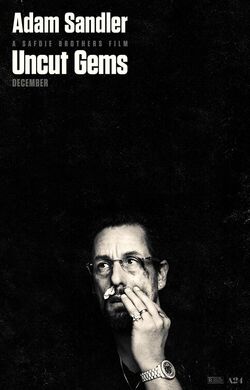 From acclaimed filmmakers Josh and Benny Safdie comes an electrifying crime thriller about Howard Ratner, a charismatic New York City jeweler always on the lookout for the next big score. When he makes a series of high-stakes bets that could lead to the windfall of a lifetime, Howard must perform a precarious high-wire act balancing business, family, and encroaching adversaries on all sides, in his relentless pursuit of the ultimate win.

Natasha Lyonne and Tilda Swinton have brief voice appearances as a Celtics staff member and an auction house manager, respectively.

Retrieved from "https://movies.fandom.com/wiki/Uncut_Gems?oldid=199216"
Community content is available under CC-BY-SA unless otherwise noted.