watch 00:59
The Loop (Movies)
Do you like this video?
Unsane 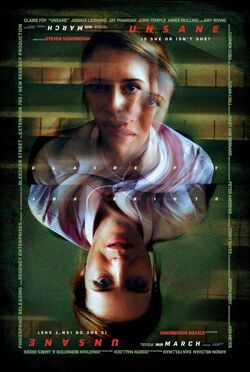 Sawyer Valentini relocates from Boston to Pennsylvania to escape from the man who's been stalking her for the last two years. While consulting with a therapist, Valentini unwittingly signs in for a voluntary 24-hour commitment to the Highland Creek Behavioral Center. Her stay at the facility soon gets extended when doctors and nurses begin to question her sanity. Sawyer now believes that one of the staffers is her stalker -- and she'll do whatever it takes to stay alive and fight her way out.

Retrieved from "https://movies.fandom.com/wiki/Unsane_(2018)?oldid=189121"
Community content is available under CC-BY-SA unless otherwise noted.