Start a Wiki
watch 01:48
The Loop (Movies)
Do you like this video?
Upgrade 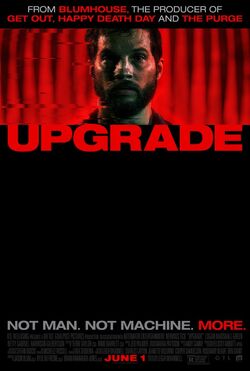 Upgrade is a 2018 cyberpunk action body horror film written and directed by Leigh Whannell. The cast of the film consists of Logan Marshall-Green, Betty Gabriel, and Harrison Gilbertson.

Grey Trace, a mechanic, asks his wife Asha to help him return a refurbished car to his client Eron Keen, a renowned tech innovator. While visiting his home, Eron reveals his latest creation, a multi-purpose chip called STEM with almost unlimited potential. Returning home, Grey and Asha's self-driving car malfunctions and crashes. Four men attack the couple. Asha is killed and Grey is shot in the neck, severing his spinal cord.

Grey returns home months later as a quadriplegic, under the care of his mother, Pamela. Asha's death and the inability of Det. Cortez to identify their attackers causes Grey to sink into depression. After a suicide attempt, he is visited by Eron, who convinces him to accept a STEM implant, claiming it would allow him to walk again. Grey regains control of his limbs and Eron has Grey sign a non-disclosure agreement, requiring Grey to pretend to still be paralyzed. While watching a drone video feed of his wife's murder, Grey hears STEM speak in his mind. STEM says it can help Grey get revenge and quickly identifies one of the assailants, Serk Brantner, from the video.

Grey breaks into Serk's home and finds proof Serk was "upgraded" with cybernetic implants, and finds messages connecting him with a local bar called the Old Bones. Serk arrives and attacks Grey, but STEM convinces Grey to allow it to take full control of his body, and easily overpowers Serk, violently killing him. Cortez later sees drone footage of Grey’s wheelchair approaching Serk’s house, but his paralysis negates him as a suspect.

Eron has tracked STEM's movements and berates Grey for potentially exposing STEM. Grey reveals STEM is speaking to him, which surprises Eron, who demands that Grey stop his investigation. Grey proceeds to the Old Bones and finds Tolan, another of the assailants. Grey allows STEM to torture Tolan to death, obtaining the name of the assailants' ringleader, Fisk. Leaving the bar, Grey stumbles, and STEM informs him that Eron is attempting to shut them down remotely. STEM directs Grey to a nearby hacker, formerly known as Jamie, and Grey manages to reach the hacker's address just as STEM shuts down completely, rendering Grey paralyzed again. The hacker manages to remove STEM's input guard and leaves just as Fisk arrives. Grey, with STEM's control restored, kills Fisk's remaining companion.

Grey returns home only for Pamela to see him walking, forcing him to reveal STEM's existence. Cortez arrives to interrogate them after finding Grey's wheelchair abandoned at the Old Bones; she leaves after planting a listening device on Grey's jacket. Grey wishes to give up the hunt, but STEM explains that Fisk will track them down and kill them. STEM reveals that the hack gives him free control of Grey’s body. STEM uses Grey to drive to Fisk, causing an automated car to malfunction and crash into Cortez’, who is tailing them. Cortez returns to Grey's home, where Pamela explains STEM to her.

Grey and STEM find Fisk, who reveals he was only hired to paralyze Grey so he could be implanted. Fisk’s own upgrades outpace Grey's movements, enabling him to gain the upper hand until Grey taunts Fisk with the death of Serk, his brother. With Fisk distracted, STEM is able to kill him. Fisk's phone reveals messages from Eron, suggesting that he had orchestrated all the events.

Grey enters Eron's home but is held at gunpoint by Cortez before he can kill Eron. Eron confesses how STEM forced him to do its bidding, having long since come to dominate all aspects of Eron's life in pursuit of its goal to become human. STEM then kills Eron and attempts to kill Cortez, but Grey fights for control over his own body, managing to shoot himself. He suddenly wakes up in a hospital room, not paralyzed; Asha enters and explains he has been unconscious for days following their crash.

In reality, however, Grey is still in Eron's home. STEM, now in full control, explains to Cortez that the psychological strain has finally broken Grey's mind; this was STEM's objective all along, as this allowed STEM to assume total control over Grey's mind and body. Grey's consciousness believes the idyllic dream state it has found, while STEM kills Cortez and leaves.

Retrieved from "https://movies.fandom.com/wiki/Upgrade?oldid=233089"
Community content is available under CC-BY-SA unless otherwise noted.