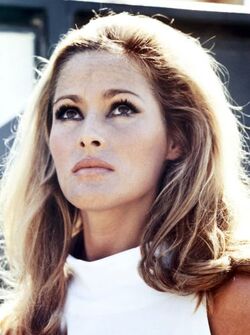 Ursula Andress (born 19 March 1936) is a Swiss film and television actress, former model and sex symbol, who has appeared in American, British and Italian films. She is best known for portraying as Bond girl Honey Ryder in the first James Bond film, Dr. No. She also potrayed as Vesper Lynd in the British Bond-parody Casino Royale.

Retrieved from "https://movies.fandom.com/wiki/Ursula_Andress?oldid=181113"
Community content is available under CC-BY-SA unless otherwise noted.