In 1994, little known studio Crest Animation release The Swan Princess, a fairy tale musical based on Swan Lake. It ticks almost every box of a Disney classic: a beautiful princess, a handsome prince, catchy musical numbers, obnoxious talking animals, and an evil sorcerer. They even released a bunch of Swan Princess merchandise.

The Swan Princess is based on no discernible movie. The small studio ripped off the Disney formula and hoped harassed parents would pick up the VHS, mistaking it for a Disney Princess movie.

Perhaps this is why, years later, Disney got its revenge with The Princess and the Frog. Angry fans of the smaller budget movie complained that the way Naveen (in frog form) looks and behaves similarly to Jean-Bob, Odette’s French frog friend, and the sphere of water when Facilier's spell is broken looks just like Odette’s transformation, and also Louis look resembles to one of the alligators in the moat.

Perhaps that make them even?

Swan Princess VS Princess and the Frog titlecard.png 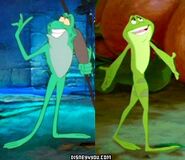 Death of the Father
Swan Princess VS Princess and the Frog gator encounter.png
Gator Encounter

Add a photo to this gallery
Retrieved from "https://movies.fandom.com/wiki/User_blog:Disneysaurus/The_Princess_and_the_Frog_VS_the_Swan_Princess?oldid=252735"
Community content is available under CC-BY-SA unless otherwise noted.
FandomShop Newsletter GalaxyQuest