Start a Wiki
watch 01:21
The Loop (Movies)
Do you like this video?
Vacation 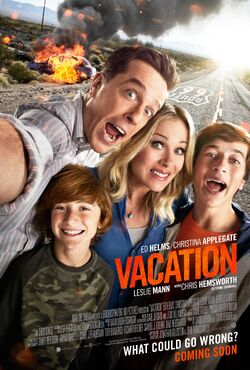 Vacation (2015) is an American comedy written and directed by newcomers John Francis Daley and Jonathan Goldstein. Starring Ed Helms, Christina Applegate, Leslie Mann, and Chris Hemsworth, it is the fifth theatrical installment of the National Lampoon's Vacation series (seventh counting direct-to-video), and was released in North America on July 29, 2015.

Paying homage to his father's original (and fateful) "Vacation" to Wally World, a now grown-up Rusty Griswold takes his own family on a road trip to "Walley World" in order to spice things up with his wife and reconnect with his sons.[1]

Retrieved from "https://movies.fandom.com/wiki/Vacation?oldid=264594"
Community content is available under CC-BY-SA unless otherwise noted.