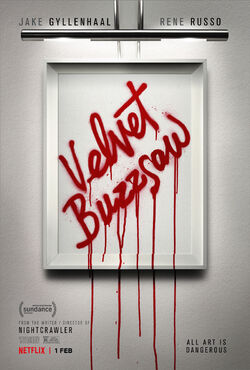 In Miami Beach, art critic Morf Vandewalt attends an art exhibition alongside his friend, Josephina, who works for Rhodora Haze, owner of the Haze Gallery and formerly a member of the rock band Velvet Buzzsaw.

Unfulfilled in his love life with his boyfriend, Ed, Morf starts a sexual relationship with Josephina. Returning to Los Angeles, Josephina finds a dead man named Vetril Dease in her apartment building, and enters his home to discover a myriad of paintings, some of which partially destroyed.

Josephina steals the paintings to show Morf and Rhodora, who become fascinated with Dease. Rhodora decides to exhibit several pieces in her gallery, which is an instant success. The artworks enchant Gretchen, Morf's art curator friend, and Piers, a former artist for the Haze Gallery. Rhodora keeps most of the paintings, and Morf and Josephina keep a small portion each.

To ensure the rarity of the paintings, Rhodora orders gallery worker Bryson transports half of them to storage. Bryson opens a crate and decides to keep one of the paintings for himself. En route, the painting catches fire from his cigarette ash and burns him, causing him to crash into a gas station. As he heads inside to clean the burns, Bryson is attacked by a painting of monkeys fixing a car and goes missing.

Researching Dease, Morf discovers he suffered from a troubled and abusive childhood that culminated in the murder of his father and a growing mental illness that permeates his works. Jon Dondon, a rival art gallery owner, has hired an investigator to uncover the same story. He attempts to reveal Dease's story to the press but is murdered when a mysterious hand hangs him by his scarf. Coco, Rhodora's former assistant who had just begun working for Jon, discovers his body. Morf sees a hand in a Dease painting suddenly move which unsettles him.

Morf discovers that Dease used blood in his paintings. Gretchen negotiates display of some of Dease's collection in the city gallery. In exchange, the city gallery will display an interactive piece called Sphere that is owned by Gretchen's primary client.

Morf and Josephina's relationship declines due to Gretchen's sabotage. After a meeting with gallery owners, Gretchen sticks her arm in one of the holes in Sphere (a prime feature of the piece that guests would do themselves). The piece malfunctions, severs her arm and she dies of blood loss. Her body stays undisturbed, mistaken for part of the artwork until Coco discovers it and calls the police. Despite her death, there is a spike in interest and demand for the Dease exhibit. Morf and Josephina break up after he finds out she is dating Damrish, a rising artist.

Morf's hallucinations worsen and he urges Rhodora to stop selling Dease's artwork. She ignores him and, knowing he will write a negative article about the artworks, tries to sell them off as fast as she can and tells Josephina to do the same.

Morf hires Coco to dispose of the artworks, and she tells him Ed shows Rhodora Morf's reviews before he publishes them to know which artworks to purchase. After breaking up with Damrish, Josephina is transported into a supernatural gallery, where the paintings melt around her and cover her skin. As Morf puts away the Dease artworks into his storage unit, he is confronted by Hoboman, a robotic art piece he earlier critiqued. After a brief chase, Hoboman snaps Morf's neck. Meanwhile, Rhodora is almost crushed by a large sculpture in her garden.

The next morning, Coco finds Morf's body while Josephina's has become part of the graffitied wall. Rhodora, eventually believing the deaths are connected to Dease, has all the artworks in her house removed. As she sits outside, her pose inadvertently imitates the Dease painting she used to hang in her bedroom. The buzzsaw tattoo on her neck begins spinning and boring into her flesh.

On the way to the airport, Coco sees a homeless man selling Dease's paintings to passers-by. Meanwhile, Piers, who has moved away to a beachside house, draws curving lines on the beach as the waves wash over them.