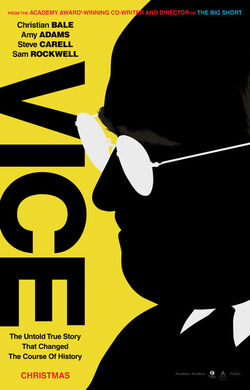 Vice is narrated by Kurt, a fictitious veteran of the Afghanistan and Iraq Wars. The film opens with Dick Cheney and other White House officials and staff responding to the September 11, 2001, attacks. The film then flashes back to Wyoming in 1963, where Cheney finds work as a lineman after his alcoholism led him to drop out of Yale University. After Cheney is stopped by a traffic cop for driving while intoxicated, his wife Lynne Cheney convinces him to clean up his life.

The film flashes forward to 1969 when Cheney finds work as a White House intern during the Nixon Administration. Working under Nixon's economic adviser, Donald Rumsfeld, Cheney becomes a savvy political operative as he juggles commitments to his wife and their daughters, Liz and Mary. Cheney overhears Henry Kissinger discussing the secret bombing of Cambodia with President Richard Nixon, revealing the true power of the executive branch to Cheney. Rumsfeld's abrasive attitude leads to him and Cheney being distanced from Nixon, which works in both men's favor; after Nixon's resignation, Cheney rises to the position of White House Chief of Staff for President Gerald Ford while Rumsfeld becomes Secretary of Defense. The media later dubs the sudden shake-up in the cabinet as the Halloween Massacre. During his tenure, a young Antonin Scalia introduces Cheney to the unitary executive theory.

After Ford is voted out of office, Cheney runs to be representative for Wyoming. After giving an awkward and uncharismatic campaign speech, Cheney suffers his first heart attack. While he recovers, Lynne campaigns on her husband's behalf, helping him to win a seat in the U.S. House of Representatives. During the Reagan Administration, Cheney supported a raft of conservative, pro-business policies favoring the fossil fuel industries. He also supported the abolishment of the FCC fairness doctrine which led to the rise of Fox News, Conservative talk radio, and the rising level of party polarization in the United States. Cheney next serves as Secretary of Defense under President George H. W. Bush during the Gulf War. Outside of politics, Cheney and Lynne come to terms with their younger daughter, Mary, coming out as lesbian. Though Cheney develops ambitions to run for president, he decides to retire from public life to spare Mary from media scrutiny.

During the presidency of Bill Clinton, Cheney becomes the CEO of Halliburton while his wife raises golden retrievers and writes books. A false epilogue claims that Cheney lived the rest of his life healthy and happy in the private sector and credits begin rolling, only for them to abruptly end as the film continues.

Cheney is invited to become running mate to George W. Bush during the 2000 United States presidential election. Recognizing that the younger Bush is more interested in pleasing his father than attaining power for himself, Cheney agrees on the condition that Bush delegates "mundane" executive responsibilities, such as energy and foreign policy, to him. As Vice President, Cheney works with Secretary of Defense Rumsfeld, legal counsel David Addington, Mary Matalin, and the Chief of Staff, Scooter Libby, to exercise control of key foreign policy and defense decisions throughout Washington.

The film returns to the aftermath of the September 11 attacks, as Cheney and Rumsfeld maneuver to initiate and then preside over the U.S. invasions of Afghanistan and Iraq, resulting in the killing of hundreds of thousands of civilians and the torture of prisoners. As the War on Terror mounts, Cheney continues to struggle with persistent heart attacks. The film also covers various events from his vice presidency, including his endorsement of the unitary executive theory, the Plame affair, the accidental shooting of Harry Whittington, and tensions between the Cheney sisters over same-sex marriage. Cheney's actions are shown to lead to hundreds of thousands of deaths and the rise of the Islamic State of Iraq, resulting in him receiving record-low approval ratings by the end of the Bush administration.

While narrating Cheney's tearful deathbed goodbye to his family after another hospitalization, Kurt is killed in a motor accident while jogging. In March 2012, his healthy heart is transplanted into Cheney. A few months later, Cheney acquiesces to his daughter Liz's saying she is opposed to same-sex marriage when she runs for a Senate seat in Wyoming, leaving Mary angry and upset. Liz later wins the election to her father's former Congressional position. At the end of the film, an irate Cheney breaks the fourth wall and delivers a monologue to the audience, stating that he has no regrets about anything he has done in his career.

A mid-credits scene depicts a focus group descending into chaos when a conservative panelist slams the film itself as biased and attacks a liberal panelist, while another younger panelist expresses her anticipation for the next The Fast and the Furious movie.

Retrieved from "https://movies.fandom.com/wiki/Vice_(2018)?oldid=188180"
Community content is available under CC-BY-SA unless otherwise noted.