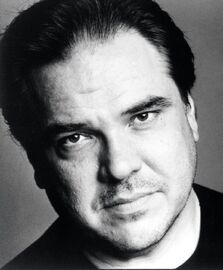 William Earl Brown is an American character actor who has appeared in many mainstream film and television projects. He is perhaps best known as Dan Dority on the HBO series Deadwood. He is also well known for playing Warren in the 1998 film There's Something About Mary and Kenny the Cameraman in the highly-successful slasher film Scream.

Brown was born in Murray, Kentucky, and is an alumnus of Calloway County High School. He graduated with a bachelor's degree in theater from Murray State University before going on to DePaul University in Chicago where, with his classmates John C. Reilly and Gillian Anderson, Brown received his master's degree. While building his résumé in Chicago's theater scene, Brown decided to give Los Angeles a try and moved to the City of Angels where he has remained ever since.

His first major movie role came as a dialogue coach in the film Backdraft teaching actors to speak with a Chicago accent. He also had a brief appearance on-screen in the film. One of his first higher profile roles was as Cameron Diaz's mentally challenged brother Warren in There's Something About Mary.

Brown joined the cast of the HBO western drama Deadwood as a star for the first season in 2004. The series was created by David Milch and focused on a growing town in the American West. Brown played Dan Dority, a trusted henchman to ambitious criminal and bar owner Al Swearengen. Brown remained a starring cast member for all three seasons of the show. Brown joined the crew of Deadwood as a writer for the third season in 2006. He wrote the episode "A Constant Throb".

Retrieved from "https://movies.fandom.com/wiki/W._Earl_Brown?oldid=72545"
Community content is available under CC-BY-SA unless otherwise noted.